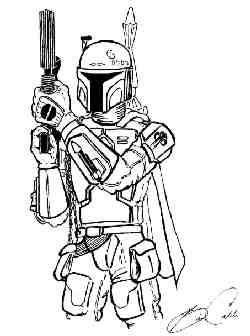 
The Mandalorians are a hardy people with a strict warrior culture decended from human colonists from Coruscant. They are famous throughout the galaxy for their armoured suits and skillfull warriors, long in their past they raided the Republic on a regular basis, but now are involved in a war against the Sith and the Empire.

Gamesmasters considering allowing Mandalorian Player Characters should consider whether they think that the lack of Force Points and the ability to double their skills when spending them balances out the extra attribute points or not.


Resistant to Force Use: Mandalorians are immune to some of the effects of the Force, and their minds cannot be read using the force, or modified using the force. However precognitiant abilities such as LightSaber Combat work perfectly well.

Inability to use the Force: The Mandalorians have a genetic defect inherited from their ancestors and compounded by the small genepool that they have grown from. They cannot use the force. Not only does this mean that they cannot become Jedi, they cannot earn or spend Force Points.

Genetically Superior: Due to the harsh circumstances the Mandalorian people grew from, they are a much hardier people than most species in the galaxy. While the Mandalorians like to see this as Genetic Superiority, it is perhaps more linked to their inability to use the force, so they have had to rely on themselves more. This "superiority" gives them a bonus 6 Attribute Dice when starting play, this is already incorporated in the attribute dice figure above.


Feared: Enemies facing the massed forces of the Mandalorian Empire will quite rightly fear them, this makes the forces opposing the Mandalorians more difficult to Command.

Honour: Mandalorians base their lives around the concept of honour, while part of this honour is serving and obeying the Mandalorian Emperor and his representitives, it is also a personal honour requiring them to protect it with deed and action.