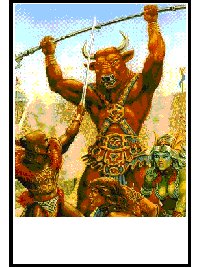 
Minotaur live in a Clannish society where honor is everything. When a juvenilely male becomes of age, he is sent on a test of manhood (usually by hunting a large scary animal). Upon success, he is given a warrior's weapon of that particular clan. This weapon stays with him for life. Lost of this weapon means he has lost his honor among his clan, and a act of atonement must be conducted to be granted a new one. Minotaur warriors are honor bound, and are sometimes compared to being 'Knight-ish'; 'Chivalrous' and are driven.


Minotaur are naturally an honorable warrior based society. Only males can be warriors. Females can obtain any position in society as long as its in a support role, to include leadership. Their government is democratic and they hold frequent elections. Matters of lesser importance are often settled in a wrestling ring. Might is right - However, since honor rules all, an obviously superior minotaur will handicap himself in the ring to make the match even. Whenever bored, a warrior will either repair, improve his weapon and armor, read tomes of knowledge, or wrestle. They do not argue, they wrestle. The winner is obviously right. Their hides make them immune to normal cold temperatures. Minotaur implore being called, or being referred to any herb / grazing animals. This will INSTANTLY cause them to roll versus normal Willpower roll (15+); failure causes them to go into a rage. This rage is always and only directed towards the person making the comment. This rage gives them +2D on strength rolls, but -2D on everything else.

Page designed in Notepad, logo`s done on Personal Paint on the Amiga.
Stats and Description by Garett Castle AKA Ogre. Image is by Larry Elmore, copyright resides with him.
Any complaints, writs for copyright abuse, etc should be addressed to the Webmaster FreddyB.