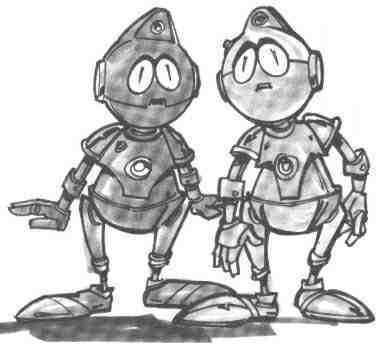 Description: The Model E is an older design from Accutronics, and has long since been discontinued but still continues in service throughout the galaxy. The Model E was designed for childcare and education, small enough to be non-threatening and an equal to young children, but tough enough to stand the rough and tumble of young teenagers. The droids were stationed in childcare centers and schools, some were found in hospital pediatric wards to treat traumatised children, some were even purchased by the rich to care for wealth heirs, however the droid could not compete with more specialised medical, nanny and teaching droids. However the well rounded abilities have meant that the droid has continued in service even though long since discontinued, and they still are fairly common due to the numbers produced over its long history. However many are now put to other tasks, and it is common to see Model E's slaving away in factories, or in other menial labour tasks such as cleaning.