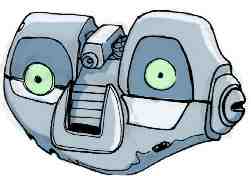 Description: The EmTeeDee class of translator droid is designed to be a small and easily carried droid capable of simple translation duties. They are intended to be programmed with up to 5 languages of the owners choice, therefore allowing their owner access to useful and commonly encountered languages without having a droid follow them around constantly. They have been introduced for use in the New Republic Senate, allowing senators and ambassadors to easily communicate with those Republic member species incapable of speaking Basic, such as Wookies. The Droids have become fairly common with visitors to worlds where Basic is not commonly spoken, and the ease with which the droids can download new languages from another Translator or Protocol droid extends their usefulness beyond merely five languages.