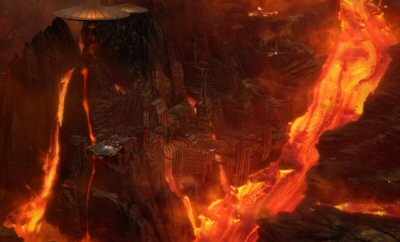 
The young world of Mustafar is literally being torn in opposing directions, caught in a gravimetric tug of war that keeps it from becoming the moon of a nearby gas giant. Despite the close proximity of massive Jestefad, Mustafar keeps to its erratic orbit, pulled by the distant influence of another giant, Lefrani. The tidal strain heats up Mustafar's molten core, resulting in spectacular geological activity across the entire planet.`

The Techno Union owns Mustafar, having laid claim to the planet over 300 years ago. Scouts from that organization discovered the unique and valuable mineral allotropes that permeated Mustafar's crust and mantle. Though the Mustafar lava is hot -- a searing 800 degrees standard -- it is cool enough to be harvested by specialized equipment.

Techno Union officials signed a treaty with the provincial Mustafarian primitives, who benefited from the most basic and inexpensive of offworld items. In exchange, they guided Techno Union builders as they constructed massive harvesting facilities on the planet to exploit the mineral riches flowing in the lava streams.

The Mustafar collection facilities employ tractor beam and electromagnetic harvesting techniques to stir the valuable minerals within the lava flow. Roiled to the surface, the deposits are then scooped up by worker droids or rugged Mustafarians lifting heavy cauldrons by hand. Baskets of molten rock and metal are then returned to the facilities where they are processed and refined for distribution. Since lava-proof armor is more costly than energy-based deflector shields, the collection facility was sheathed in energy to protect it from the incredible temperatures.

After the destruction of the Separatist Council and the Imperialization of the Techno Union, Mustafar was largely forgotten. A Separatist stalwart, the fugitive Geonosian Gizor Dellso, holed up on Mustafar during the early days of the Galactic Empire, requiring the attention of the loyal 501st legion of troopers to storm the hellish world.

Located in the Outer Rim, the tiny planet of Mustafar is a fiery world where lava is mined like a precious natural resource. Its bleak landscape is a visual assault of jagged obsidian mountains with towering fountains of fire and lava blasting from beneath the surface. This lava also streaks the blasted landscape in huge winding rivers and plunging cataracts. Mustafar's skies are obscured by choking black clouds of ash, smoke and tephra. The intense geological activity creates natural scanning interference that has kept prying eyes away from Mustafar for most of its history.

These inhospitable features made Mustafar an ideal sanctuary for the ever mobile Separatist Council that led the Confederacy of Independent Systems during the Clone Wars. After repeated setbacks, General Grievous was ordered by Darth Sidious to secure the Council on Mustafar, where they would await further instructions. An enormous cliff-side industrial facility served as headquarters to the commerce baron war chiefs. Neimoidian soldiers and battle droid infantry provided security, while shimmering deflector shields protected the structure from the volatile surroundings.

Upon his ascendancy to Galactic Emperor, Darth Sidious had no further need of the Separatists. He dispatched his new apprentice, Darth Vader, to dispose of his wartime collaborators on Mustafar. Upon arrival, Vader silently stalked into the inner chambers of the mining facility. His lightsaber blade made short work of the Separatists, cutting them down and effectively bringing an end to the Clone Wars.

Amongst this apocalyptic landscape of erupting volcanoes, Jedi Master Obi-Wan Kenobi confronted Darth Vader, his former apprentice. The two entered into a spectacular lightsaber duel that worked its way through the Mustafar collection complex. Through the course of their battle, the protective shields were deactivated, and the facility was exposed to the planet's full geological fury.

A geyser of lava erupted, dropping molten rock on one of the outrigger collection arms of the facility where Obi-Wan and Vader dueled. The arm collapsed under the heat and strain, plunging into the lava river. Before the severed collection arm succumbed to the pull of a lavafall, Vader and Kenobi leapt from the doomed structure onto a nearby worker droid and harvesting platform, respectively. Their duel continued on these cooled repulsorlift surfaces before ending abruptly on the black sand shores of the lava river.

Kenobi bested Vader, leaving the Dark Lord to die on the Mustafar river banks. Darth Sidious sensed Vader's anguish, and arrived in time to rescue his fallen apprentice. Maimed and mortally wounded by lightsaber and fire, Vader was reconstructed as a cyborg and encased in a black protective life supporting suit.

Despite the hellish nature of its environment, Mustafar has nonetheless produced native life capable of surviving in the fiery extremes of the planet. The sentient Mustafarians -- of which two notable subspecies exist -- paid little heed to the galactic events that culminated on their world. They went about their business, gathering precious minerals and energy from the lava streams, riding their massive lava fleas across the stygian lands.