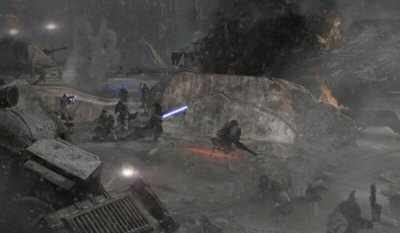 
In the ancient trade language of the Muuns, Mygeeto means "gem." It's a fitting name for the glittering world, perennially locked in ice age and covered in crystallized glaciation. Its internal fires have long cooled, and the geologically dormant world has left a trove of precious stones within its crust and mantle. The enormous nova crystal deposits and fields of lasing crystals have made it one of the most valuable worlds in the galaxy. The Jedi had longed to explore the world for crystals suitable for lightsaber use, but since its discovery, Mygeeto had been firmly in the hold of the InterGalactic Banking Clan.

The gaunt Muun bankers jealously guarded their world with an intimidating blockade of frigates and cruisers. Daring tales of raiding the crystal caves of Mygeeto became the stuff of cantina tall tales throughout the galaxy. If a thief was foolhardy enough to somehow penetrate the screen of defensive ships, he still had to contend with a planet that was mostly wasteland. If the harsh winds and jagged surface weren't discouraging enough, burrowing through the planet's ice shelves were enormous worms with voracious appetites and ill tempers.

The few Mygeeto cities that dot the reflective surface are sunken into the crystalline surface. Drawing power by synthesizing specific crystal breeds, the cities are built around enormous capacitor towers that store and distribute energy. The cities serve to administer the crystal mines, but also are vaults for the Banking Clan's most security-conscience clients. As home to the Confederacy's deepest coffers, Mygeeto became a prime target during the Outer Rim Sieges.

A frigid world of crystallized ice, Mygeeto was a major holding of the InterGalactic Banking Clan that became a battle site during the Outer Rim Sieges of the Clone Wars. General and Jedi Master Ki-Adi-Mundi and Commander Bacara led the Galactic Marine clone troopers in extended urban fighting amid the ultramodern towers of a major Mygeeto city. The blistering cannonades and laserfire of towering Separatists tri-droids and Republic artillery carriers reduced much of the city and crystalline landscape into rubble, polluting the icy winds with a persistent pall of gray ash.

During a concentrated Republic push to rout the Separatists, Order 66 was enacted on Coruscant. Ki-Adi-Mundi was targeted by his clone forces, branded a traitor by the Chancellor of Republic. He was killed in a hail of blaster bolts.