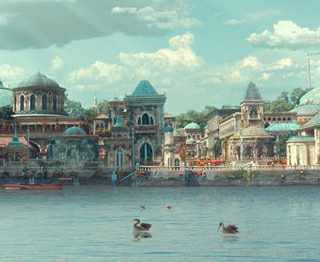 
An idyllic world close to the border of the Outer Rim Territories, Naboo is inhabited by peaceful humans known as the Naboo, and an indigenous species of intelligent amphibians called the Gungans.

Naboo's surface consists of swampy lakes, rolling plains and green hills. Its population centers are beautiful -- Naboo's river cities are respendlent with classical architecture and greenery, while the underwater Gungan settlements are a beautiful display of exotic hydrostatic bubble technology.

Naboo is a geologically unique world. It lacks a molten core, indicative of an ancient world. The planet is a conglomerate of large rocky bodies permeated by countless caves and tunnel networks. This causes numerous swampy lakes on the surface, which lead deeper into the planet's structure. The native Gungans have developed transports that exploit these cave networks, but even these hardy explorers pause at venturing too deep into the planet core, for it is infested with gargantuan sea beasts with ravenous appetites.

When the senate enacted a measure that would increase taxation along outlying trade routes, the credit-hungry Trade Federation protested by blockading Naboo. A screen of huge warships surrounded the planet, cutting off supplies to the Naboo. The world's leaders, Queen Amidala and Governor Sio Bibble, were taken captive by the Trade Federation's droid armies.

Jedi Knights sent by Supreme Chancellor Valorum freed Queen Amidala, and she then journeyed to Coruscant, to request the senate's intervention in the blockade. Even Naboo's representative, Senator Palpatine, could not get past the bureaucratic stalling tactics of the Trade Federation.

Disheartened with the senate's inability to act, Queen Amidala took actions into her own hands. She returned to Naboo and recruited the help of the Gungans. Together, Naboo's two cultures were able to repel the Trade Federation invasion, and bring peace back to the serene world.

The cooperation of the Naboo and the Gungans was unprecedented, and marked a new era between the two people. Ages ago, when Naboo and Gungan first met, there was bloodshed, and tensions between the two cultures continued for thousands of years. Despite the suffering caused by the Trade Federation invasion, the end result brought about new prosperity for Naboo.

In the interests of preserving ecological stability, alleviating overcrowding in Otoh Gunga, and fostering peace and goodwill, the Naboo and the Gungans launched an ambitious joint venture to colonize Ohma-D'un, one of Naboo's three moons.