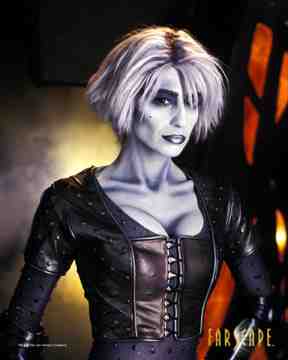 
The Nebari are a near-human species which only differs in appearance from humans in their colouration, as Nebari are monochromatic and their colouration is in shades of grey. Male Nebari have black hair, females have white hair, but the occasional androgeneous members of the species can have either colour, but these are usually rounded up by the Nebari government. The Nebari are an technologically advanced species having avoided conquest throughout their entire history, and have the technology to disable powerful warships without destroying them. Nebari history also recounts how their scientists managed to create a gateway to another dimension that destroyed four of their enemies worlds, but thankfully any knowledge of how to do this has now been lost. The Nebari are a sexually active and promiscuous species, with a high level of inquistitiveness and a certain air of innocence to them, being fairly trusting and open with even those they have just met.

Mindwiping: The Nebari people use mindwipes and re-education to remove criminal and dangerous traits from criminals and anti-social elements within their society. This means that a Nebari may be missing parts of their memories if they have been a criminal, it also means that those who fear this mindwiping may be on the run from their own people.

Page designed in Notepad, logo`s done on Personal Paint on the Amiga.
Text completely by FreddyB. Image is from the series Farscape, copyright resides with the shows makers.
Any complaints, writs for copyright abuse, etc should be addressed to the Webmaster FreddyB.