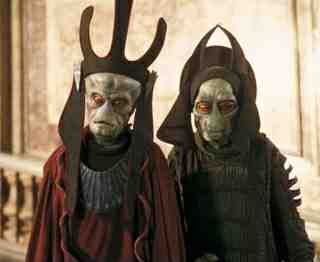 
If there's money to be had, a Neimoidian will be nearby. So says a common spacer stereotype, justified by the species' reputation for excelling at business. While Neimoidians are generally a cowardly lot, in financial issues, they can be bold and aggressive.

It was this instinct that led them to the command of the galaxy- spanning Trade Federation, a vast consortium of business interests that controls interstellar shipping in the Galactic Republic. When the government sought to tax outlying trade routes, the Neimoidians reacted with a brazen blockade of the peaceful world of Naboo. That the skittish Neimoidians could undertake so bold a move is remarkable; some suspect an unseen force manipulating events behind the scenes.

The Neimoidian life-cycle has contributed much to their cutthroat business acumen. Born as disgusting grubs, Neimoidian offspring are placed in communal hives and given access to limited food supplies. The grubs then compete for food, and many young die if they are too weak to fend for themselves. Once Neimoidians achieve the age of seven, they emerge from the hives, having learned to fear death and to hoard goods.

Though they call Neimoidia home, Neimoidians can trace their ancestry to the ancient Duros spacefaring culture. The two share a striking similarity in appearance, but their personalities could not be more distant. While the Duros are a gregarious, expressive and adventurous lot, the Neimiodians seal themselves away from others, preferring to let droids do their talking.

Neimoidians place great value on wealth, and dress to display their riches accordingly. High-ranking officials dress in ornate and lavish gowns, towering headpieces, and the elite even travel about in inconvenient yet expensive conveyances called mechno-chairs.

Following the failed invasion of Naboo, the Neimoidians began losing favor in the galaxy. Though the command hierarchy of the Trade Federation still belonged to them, many Neimoidians fled from public view. Those that needed to conduct business took to calling themselves Duros to avoid the stigma.


Born-Traders: The Nemodians are born to make and break deals and organise trades virtually from when they are grubs, operating in business as if they were born with the skills. This is virtually true and they receive a bonus 2D to Bureaucracy, Business, Bargain and Con skills.


Treacherous: The Nemodian people are rarely trusted across the galaxy, and few people believe what a Nemodian says.