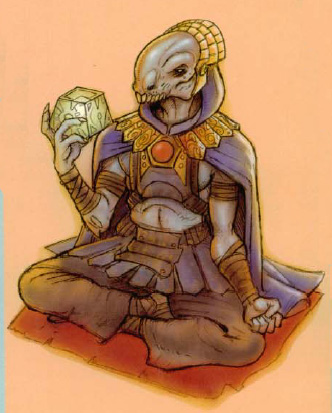 Low-light Vision: A Draethos can see twice as far as a normal human in poor lighting conditions.

Skill Bonus: Draethos are encouraged to learn as much as they can, and most adults are experts on several topics. As such, Draethos characters receive 2D for every 1D placed into Knowledge skills at the time of character creation only.

These are the known powers Odan-Urr possessed and it is believed that he had access to other powers.


A Draethos Jedi Master, Odan-Urr was a grey-skinned alien who was assigned to assist Empress Teta in securing The seven systems, and he was also given the task of being the Watchman of the Koros System. Descended from a race of fierce predators, he communicated by telepathic means, contacting all his people through the Force, rather than speaking.

Odan-Urr was trained by the ancient Master Ooroo, and was content to simply study the history of the Jedi and the Sith before being dispatched to the Empress Teta System. It was Odan-Urr who had a vision of Marka Ragnos' death and the chaos that would result from it. He was taken to Coruscant by Empress Teta, in order for him to alert the Old Republic to the danger. Unfortunately, the Republic ignored Odan-Urr's vision, claiming it was the delusion of an untrained Knight. Teta, however, was not as demeaning, and mustered her own armed forces to prepare for a Sith attack. Odan-Urr joined his own Master, Ooroo, in the defense of Kirrek against Naga Sadow's Dark Side forces. When the tide began turning to the Sith forces, Ooroo sacrificed himself to kill them off with the cyanogen atmosphere in which he lived. His dying words to his student were prophetic, telling the young Jedi that he would become one of the most ancient Jedi ever. Odan-Urr then stood by Empress Teta's side during the Great Hyperspace War, and assisted in the destruction of Naga Sadow's Sith Empire.

After searching the wreckage of Sadow’s ship, he found the Sith Holocron and took it with him to Ossus, where he helped create the huge Jedi library. Odan-Urr later presided over the Jedi Assemblies for more than 600 years prior to the assembly on Deneba to discuss the rising Dark Side tide and the Krath. It was Odan-Urr who taught Nomi Sunrider how to block another person from the Force. Odan-Urr was the Jedi keeper of antiquities, and possessed a rare Sith holocron. His possession of the dark holocron did not go unnoticed by Exar Kun, who killed Odan-Urr while stealing it.