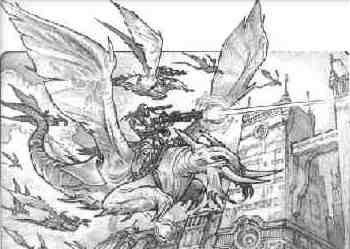 Description: The War Beasts of Onderon are large powerful carnivores, that would normally prey on humans for food, but have entered into a semi-symbiotic relationship with the tribes of Onderon. The creatures actually originate from a moon of Onderon, and can enter the much richer biosphere of Onderon when the atmospheres of the moon and planet interact once per year. The tribes people of Onderon captured some of the creatures and trained them as mounts, this allowed the tribes people to mount a defence against the attacks by the creatures of their moon, and allowed the War Beasts a regular diet and far less risk than they were used to.


Page designed in Notepad, logo`s done on Personal Paint on the Amiga.
Text completely by FreddyB. Image is by Dark Horse Comics, copyright remains with LucasFilm.
Any complaints, writs for copyright abuse, etc should be addressed to the Webmaster FreddyB.