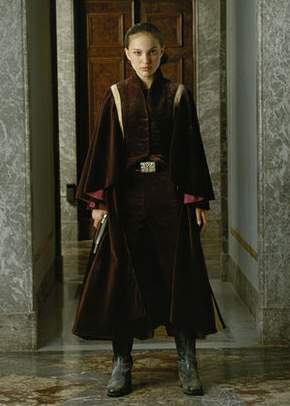 
Born Padmť Naberrie, Queen Amidala was the formal name of the royal leader of Naboo. As a child, Amidala was prodigiously talented and extremely well educated. She had long been interested in public service, volunteering in the Refugee Relief Movement in her youth. Her efforts helped in the Shadda-Bi-Boran exodus. At the age of eight, she joined the Apprentice Legislature and became an Apprentice Legislator at age 11. By 14, she was elected Queen of Naboo.

During the Trade Federation siege of Naboo, the scheming Neimoidians tried to force the strong-willed Amidala to sign a treaty that would legitimize a brazenly illegal occupation. Amidala refused, and was sentenced to a prison camp. En route to incarceration, Amidala was freed by Jedi ambassadors, who took the Queen and part of her retinue to Coruscant, to plead her case before the Senate with the help of Naboo's galactic representative, Senator Palpatine.

On Coruscant, Amidala learned of the inefficiencies of galactic politics, watching as Trade Federation political maneuvering stalemated her plea. Following advice from Senator Palpatine, Amidala called for a Vote of No Confidence in Supreme Chancellor Valorum.

Fed up with the Senate, Amidala returned to Naboo. She requested aid from the native Gungans in freeing her captured capital. During the Battle of Naboo, Amidala infiltrated her own palace, and forced Neimoidian Viceroy Nute Gunray to end the occupation. The cowardly Neimoidians, having their armies defeated, capitulated and freedom was brought back to Naboo.

While Queen Amidala was the ruler of Naboo she had a large staff of advisors and aides that handled the day-to-day affairs. Sio Bibble, for instance, was Naboo's governor. Captain Panaka was Amidala's loyal bodyguard and head of security. Ric Oliť was the pilot of the Queen's gleaming Royal Starship and leader of Bravo Flight.

Perhaps most important in Amidala's entourage were her five handmaidens. Sachť, Yanť, Rabť, Sabť and Eirtať not only helped the Queen with her intricate gowns, hairstyles and make-up, but they were also trained in self-defense. When in danger, Queen Amidala disguised herself as one of her handmaidens, and adopted her less formal name of Padmť. When disguised as Padmť, Sabť assumed the role of Queen in her place.

When her terms ended, Amidala was constitutionally obligated to step down as Queen, though the public would have easily backed an amendment allowing her to serve longer. Though she had every right to retire and concentrate on her personal life, Amidala continued to be passionate about public service. At the request of the new Naboo monarch, Queen Jamillia, Amidala served as Senator of Naboo, taking the position once occupied by Palpatine. In a galaxy undergoing tumultuous changes, her outspoken nature shone as a beacon of reason and rationality in an increasingly fragmented Senate.

With the rise of a Separatist movement that threatened the stability of the Republic, Amidala was one of the few championing a peaceful resolution to the crisis. Alarmist Senators tried to create a military force to protect the Republic, but Amidala led the opposition against the Military Creation Act. She believed such a measure would inevitably lead to hostilities against the Separatists.

On the day of the Military Creation Act vote, Amidala's starship was attacked upon arriving at Coruscant. Seven people, including her decoy Cordť, died in the explosion. Though some suspected that disgruntled spice miners from the moons of Naboo were the culprits, Amidala believed that it was actually Count Dooku, leader of the Separatists, behind the attack. In truth, it was an old enemy, Nute Gunray, who was behind the bounty hunters hired to finally silence the young woman from Naboo, though that would go undiscovered for some time.

At the behest of Supreme Chancellor Palpatine, Amidala was placed under the protection of the Jedi Knights. Amidala was once again reunited with Obi-Wan Kenobi and his apprentice Anakin Skywalker, whom she had not seen in a decade. A second assassination attempt by the bounty hunter Zam Wesell revealed just how gravely in danger Amidala was.

Anakin was to escort Padmť to Naboo, where she would be sequestered while the Jedi investigated the attacks against her. In moments of quiet solitude against the beautiful landscape of Naboo's Lake Country, Anakin and Padmť bonded, rekindling an affectionate friendship that had been interrupted ten years ago, and falling into a deeper love.

It was a love forbidden to both. As per the tenets of the Jedi Code, Anakin could not enter into a romantic relationship, and Padmť needed to focus on her career. Despite their strong feelings, it was Padmť who remained the realist, rebuffing Anakin's overtures while attempting to still her own heart.

Anakin's love for Padmť was not all that was troubling him. He suffered from terrible nightmares of his mother in danger. When he could bear it no more, Anakin returned to Tatooine, with Padmť in tow, to find Shmi Skywalker.

Anakin did find his dying mother, and lashed out in vengeance against the Tusken Raiders that had tortured her. When he returned to Padmť, he confessed his actions, and he collapsed with shame and despair over what he had done. Padmť saw the wounded, sobbing youth, and let her compassion guide her heart as she comforted him.

Shortly thereafter, Anakin and Padmť voyaged to Geonosis, to rescue Obi-Wan who had been captured by Separatist forces. Padmť hoped to use her diplomatic skills to parley with the Separatists, but she and Anakin were captured by the Geonosians. Placed on trial for espionage, Amidala and Anakin were sentenced for execution.

Faced with overwhelming evidence of her mortality, Padmť lowered her emotional guard and professed her love to Anakin. The two were then placed in an execution arena alongside Obi-Wan, and three deadly beasts were unleashed upon them, much to the delight of the Geonosian spectators. Though sustaining a glancing slash from a ferocious nexu, Padmť held her own, and disappointed her would-be executioners.

The spectacle was cut short with the arrival of Jedi reinforcements, and then the opening battle of the historic Clone Wars. Despite her initial objections to a Republic army, Padmť nonetheless fought alongside the newly created clone troopers against the Separatist droid forces.

After the Battle of Geonosis, Anakin escorted Padmť Amidala back to Naboo. There, at a secluded lake retreat, the same place where their forbidden love began to blossom, the two were quietly wed in a ceremony witnessed only by C-3PO and R2-D2. This tranquil expression of love preceded some of the darkest moments to be faced by Amidala and by the galaxy as a whole.

Amidala continued to serve the Senate faithfully, though she was often distracted by the growing career of her secret husband. Anakin was becoming a war hero known throughout the Republic, and while the citizens thrilled at his exploits, she was deeply worried for his safety. The few moments they could snatch together were all too brief. The war was concentrated in the Outer Rim, far from Coruscant, and Padmť saw very little of Anakin. By the time the Outer Rim Sieges ended, Padmť had stunning news to deliver to Anakin --- he was to be a father.

The war years saw the continued transformation of the Republic. To efficiently battle the Separatists on numerous fronts, Chancellor Palpatine enacted executive decrees that saw more power funneled to his office, stripping away the last of the Senate's lackluster ability to wage war. Many welcomed the handover of power, particularly the corrupt politicians. But Padmť became the moral center for a number of idealistic Senators who grew wary of Palpatine's amendments. Favoring a diplomatic solution within the boundaries of the law, Padmť began collecting the pledges of what would become the Delegation of 2,000, a group of disaffected Senators formally critical of Palpatine's rule.