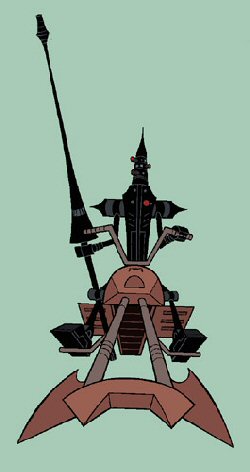 Description: As moneylenders to many of the most advanced technology firms in the galaxy, the InterGalactic Banking Clan had at its disposal the latest high-tech weapons to turn against the Republic during the Clone Wars. Phlut Design Systems, a Muunilinst-based weapons development firm, took out a sizable capital investment loan from the IBC to fund a secret battle droid program that it hoped to sell to the Trade Federation. When PDS was unable to make payments on the loan, the IBC responded by seizing the assets of the company, and, ironically, added the battle droids to the new Confederacy of Independent Systems army. As an InterGalactic Banking Clan asset, the new droids were renamed the IG-series. The tall, thin battle droids were created in the image of the gaunt Muuns that developed them. They were stronger than the standard Baktoid droids used by the Trade Federation, and had quicker response time. Working with the military advice of bounty hunter Durge, the Banking Clan armed the droids with power lances and anti-vehicle mines, and deployed them on speeder bikes as homeworld security around the commerce citadels of Muunilinst. Durge led an army of IG lancers during the Battle of Muunilinst in the Clone Wars.


Page designed in Notepad, logo`s done on Personal Paint on the Amiga.
Stats by FreddyB, descriptive text by StarWars.com. Image is by LucasArts, copyright resides with them.
Any complaints, writs for copyright abuse, etc should be addressed to the Webmaster FreddyB.