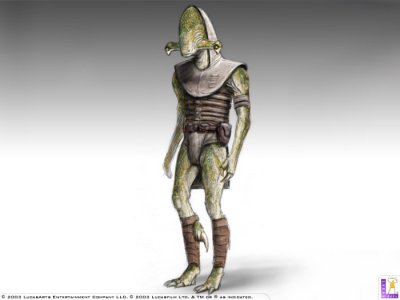 
In the field of galactic archeology, the Rakata species presents researchers with an anomaly. The Republic has been in existence since the arrival of hyperspace travel 20,000 years ago. Before that time, all known races could barely escape their own solar systems, and little information was shared between worlds. The Rakatas, however, appear to have been exempt from that rule. Hints of their one-time presence seem to be buried on myriad worlds, though this evidence is often contested due to the difficulty in recognizing such remnants. This is an understandable impediment given the length of time that has elapsed since their passing.

It is estimated that the Rakata civilization ceased to exist nearly 30,000 years ago, the height of its power predating the Republic by ten millennia. The scarcity of remains suggests that they were either very careful with access to their resources, or that attempts were made to intentionally remove any trace of their passing once they had gone. Both hypotheses tend to suggest that the Rakatas did not arrive on these worlds as ambassadors or merchants. No other species appears to have been so widespread, and yet so thoroughly purged from the galactic record.

While defining the Rakata culture is confined to guesswork, researchers have had better luck reconstructing the anatomy of the species. This has involved studying many ancient records, including the scrawled drawings of various peoples just developing sentience at the time. Artifacts, when they could be found, have also been analyzed to determine the shape of hand they were designed for, and the musculature that would have found them comfortable to use. This has resulted in a fairly clear physical portrait of these early galactic pioneers, though what became of their empire remained unknown until the coming of Darth Revan.

The Rakata were roughly humanoid in bodyplan with amphibian-like features. They developed an advanced technology tens of thousands of years before the formation of the Galactic Republic. They used this advantage to conquer and enslave other species, forming an "Infinite Empire" of five hundred subject planets. At its height, the population of this empire was ten billion Rakata and one trillion slaves.

The Rakata were described as a cruel and savage species. Rakata were known to defile the bodies of slain enemies by eating them, and they also practiced slavery. An endless stream of supplies was needed to continue the expansion of their empire. To this end, they created the Star Forge. The Star Forge met the Rakata's need for starships and war droids -- but at a terrible price.

The Star Forge was powered by the The Dark Side of the Force. Rakata scientists and engineers were unconcerned that the Star Forge would have access to a near-limitless supply of energy. They believed that they could control it.

As a semi-living entity, the Star Forge gorged itself on this Dark Side power, and it used this insidious ability to manipulate the Force to cause the Rakata to fall out amongst themselves in a devastating civil war. The hate and anger created in this war fed the Star Forge.

Matters became even worse when a deadly plague that killed only Rakata broke out. (It is theorized that the plague was the creation of a slave species.)


Non-Force Sensitive: The Rakata once used the force to a higher level than any other species, integrating it into their technology and the majority of their species being force sensitive. However their technology became tainted by the Dark Side of the Force, and their civilisation fell into corruption and destroyed itself. Only the few members of their species who were not force sensitive were immune to the effects of the corruption and survived this time of destruction leading to a loss of force sensitivity in the survivors of the species and their decendants.


Ancient Civilisation: The Rakata were once the dominant species across the entire galaxy although this empire has now long since fallen. However some evidence remains, and some technology is still operation even after the many millenia which have passed since then.


Page designed in Notepad, logo`s done on Personal Paint on the Amiga.
Stats by FreddyB. Image and descriptive text is from Knights of the Old Republic, copyright resides with LucasArts / Bioware.
Any complaints, writs for copyright abuse, etc should be addressed to the Webmaster FreddyB.