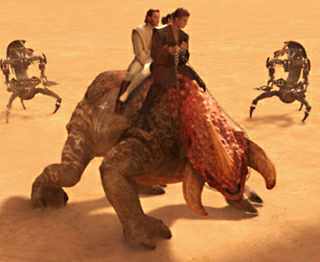 Description: Reek originally hail from Ylesia, where they roamed the plains in great herds. There have been attempts to breed reek for simple, easily-domesticated labor and a source of food and materials. The Codian Moon maintains reek ranches. Scarcer resources have instilled even greater territoriality among those reek. With plummeting profits, unscrupulous ranchers have discovered that the beasts can be starved into carnivorism to provide violent entertainment, and have sold the animals into such cruel endeavors.

As a combatant, the reek is formidable. Its strong jaws, used to chop tough wood-moss chunks into pieces, can rend flesh and snap bones easily. Its massive horns, used in displays of dominance in the wild, can gore opponents, and few would be able to survive a trampling attack from a reek. A stout brute with tough leathery skin, the reek was one of three deadly creatures unleashed in the Geonosian execution arena, dispatched to kill Anakin Skywalker, Padmé Amidala and Obi- Wan Kenobi.

The surprisingly fast animal was directed by picadors to attack Anakin Skywalker. Skywalker used his Jedi agility to leap upon the beast, and used the reek's sheer muscle-power to break the chains that bound him. Skywalker was able to momentarily calm the reek, and used the massive horned creature as a mount while chaos reigned within the arena.


Page designed in Notepad, logo`s done on Personal Paint on the Amiga.
Stats by FreddyB. Image and Descriptive Text is from StarWars.com, copyright remains with LucasFilm.
Any complaints, writs for copyright abuse, etc should be addressed to the Webmaster FreddyB.