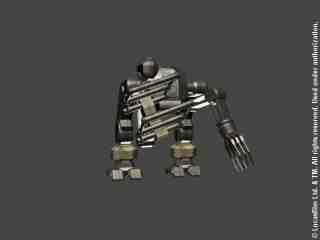 Description: The LF-44 is a repair droid designed to do heavy maintanence on vehicles, and was envisioned as working in speeder lots and garages, repairing and maintaining civilian vehicles. Although these droids work throughout the galaxy in this role, they are more famously used by the Rebellion and New Republic in a battlefield maintanence role. During prolonged battles with the Empire, the Rebellions vehicles, which generally were weaker and older, would commonly take damage or have systems failures, this meant that the Rebels constantly had to fix or at least patch up their combat vehicles, meaning that the few qualified technicians they had would have to venture out onto the battle field to keep the Rebellions forces fighting. When the Rebels accidentally ended up with a shipment of over a thousand LF-44's, they immediately pressed them into service, allowing these skilled droids to take the risk instead of the technicians. The LF-44's personalities which are dull to say the least, accepted these tasks without complaint, and many a rebel speeder pilot has been overjoyed to see one of these large uncomplaining droids plodding through enemy fire to get their vehicle airbourne once more.