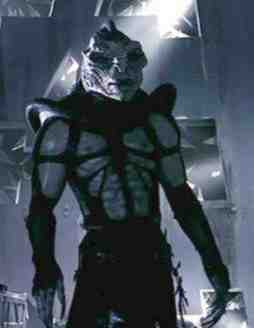 Scarrans are a large fierce lizard-like species, who have formed an empire with several subjugated species under their control. Although physically very powerful, most of their strength lies within their heat gland, which when removed weakens the Scarran a great deal. Scarrans love heat, and their tough scaly skin is mostly resistant to damage from heat sources, although energy weapons can, and do kill Scarrans. They see all other species as weak, and love nothing better than proving this by forcing weaker species to survive in the high temperatures that the Scarrans see as normal, this is especially true of the Sebaceans, who have a natural weakness to heat, which the Scarrans love to take advantage of. Scarrans are split into two castes, with the warriors looking more animalistic and being tougher and stronger, but the slightly more human looking ruling caste being more intelligent and imaginative making them the natural leaders, scientists and planners for the species.

It is recommended that like the Noghri, the Scarrans should not be allowed as beginning characters, and that player character Scarrans be weakened to take their pure power into account.


Heat Gland: Scarrans have a heat gland within their chest which as well as providing them with much of their impressive strength and resiliance, makes them able to emit waves of heat from their body. This heat does 4D stun damage, although can be kept up to kill an opponent, the heat wave only has a range of 3 meters.

Truth Sense: Scarrans also have the ability to sense when they are being lied to, this is linked to their Heat Gland, so the subject of their emitted heat wave has the veracity of what they say checked. This means that Scarrans often torture prisoners with their Heat Wave, knowing if they tell lies, and finding out secrets. However the gland doesn't tell whether they have told the whole truth, only if they have told the truth, allowing smart and tricky prisoners of the Scarrans to decieve this powerful species.