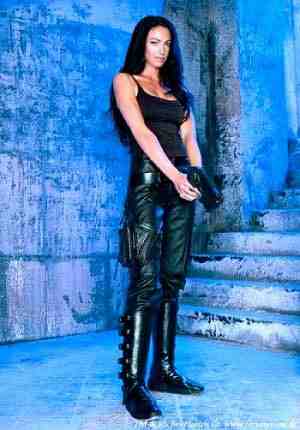 
Sebaceans are a near-human species with several differences, they live a lot longer than humans, well over 100 years, and have differences in their internal organs, eg they have a paraphoral nerve that is responsible for filtering waste from the body in much the same way as a human liver. Sebacean culture is based around their military force called the Peacekeepers, Peacekeepers are Sebacean, but not all Sebaceans are Peacekeepers. Other cultures and species hire the PeaceKeepers to keep order, but once they get a hold on a society, they take over. They’re xenophobic and condemn as irreversibly contaminated anyone who has more than a passing contact with unclassified species.


Military Training: The PeaceKeepers are such a major part of Sebacean life that all children receive military training from a young age, even if they do not go on to join the PeaceKeepers. In game terms this means that for every die put into Blaster at the time of character creation, they get two dice.

Heat Delirium: Sebaceans are extremely sensitive to heat, and although they can take short bursts of high temperature, any long term raise in temperature (such as being in a desert) will lead to them entering heat delirium, which eventually leads to symptoms similar to Alzheimers in a human. Sebaceans call this the Living Death, and will prepare using cooling suits if they are aware that the temperature will be dangerously high. Which a very dangerous condition, this does not effect Sebaceans much worse than Heat Exhaustion in humans, although simply drinking water doesn't stop Heat Delirium, and Heat Delirium is permanent.

Delayed Pregnancy: Sebacean females have the ability to delay their pregnancies until it is more convenient for them to become pregnant. This seems to be a genetically engineered feature rather than natural, simply because this is considered to make them better soldiers.


Xenophobia: Although Sebaceans don't hate or fear those who don't look like them, they do look down on aliens, and think of them as inferior.