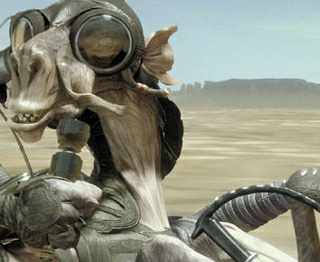 
An especially dangerous Dug who could once be found roaming the streets of Mos Espa, Sebulba is a shifty Podracing champion who never lets such trite concepts as rules and sportsmanship get in the way of victory.

Sebulba was the reigning champion of the Outer Rim Podrace circuit in the waning days of the Republic. Though no one will dispute that his souped-up, overpowered orange-colored racer was fast, many of his triumphs were afforded through the use of illegal weaponry hidden aboard his vehicle. Sebulba flies dirty, and will even stoop to sabotaging a competitor's Podracer before the race begins.

A hotshot with an interminable ego, Sebulba draped himself with the airs of success. Among his most prized possessions were a lovely pair of Twi'lek masseuses that rubbed him down before a stressful race.

At the Boonta Eve Classic, Sebulba was heavily favored to win. In a surprising upset, however, a local slave boy backed by a mysterious outlander bested him in the contest. To add even more insult to this career-injury, Sebulba lost control of his Podracer in the final stretch, and crashed the expensive giant into the desert sands.