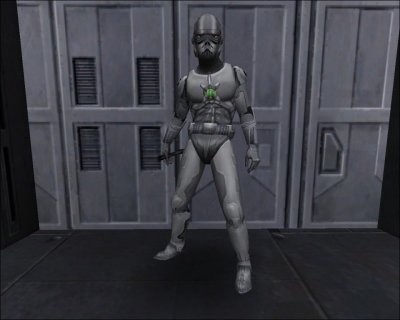 
Shadow Troopers are Reborn Jedi created using the corrupted power of the Valley of the Jedi on Ruusan, trained in some force skills and empowered to a moderate level of capability as a Dark Jedi they are equipped with cortosis shielded Storm Trooper Armour. They fought for the Dark Jedi Desaan and Admiral Galak Fyyar attempting to destroy the Jedi Academy on Yavin IV, although most were either killed or rounded up by the Jedi Students. Trained to a slightly higher level than the other Reborn Jedi, their armour is also more powerful than the personal shielding that the Reborn used and were more part of Galak Fyyar's plans for his ascention to the Imperial Throne rather than Desaan's plans for a new Dark Jedi Order headed by him.
Dex: 3D
Blaster: 4D
Dodge: 5D
Lightsaber: 7D