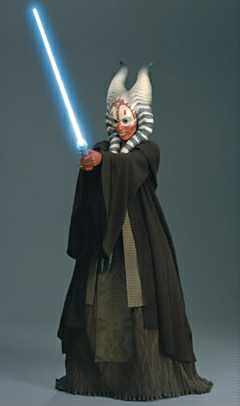 SPECIAL ABILITIES
Spatial Awareness: Togruta can sense their surroundings through a kind of passive echolocation. If unable to see, a Togruta character can attempt a Moderate Search skill check. Success allows the Togruta to ignore any penalties for being blind and act normally.

Stealth: The Togruta are natural predators and so are skilled stalkers. This provides them with a +2 pip bonus to Hide skill checks (not added above).

These are the known powers Shaak Ti possessed and it is believed that she had access to other powers.


Shaak Ti was a Togruta, a humanoid species from the planet Shili. To protect themselves from the dangerous predators of their homeworld, the Togruta would band together in dense tribes and rely on their disruptive natural pigmentation patterns to confuse the slow-witted beasts. Shaak Ti was a notable exception to the communal-minded Togruta in that she preferred to operate alone. Nonetheless, her heritage was evident in the accuracy and agility she demonstrated when moving and fighting in bustling crowds. Aiding in her perception of her surroundings are hollow spaces in her montrals that gather information ultrasonically.

Shaak Ti has trained two Padawans in her career as a Jedi Master, but sadly saw both of them fall victim to criminal killers shortly after their passing of the Jedi trials. For years, she secretly kept in her heart the pain of losing Fe Sun, one her students, to the Zeltron murderer Lyshaa, though her Jedi demeanor of detachment hid these emotions.

During the Clone Wars, Shaak Ti was made a General in the Grand Army of the Republic. She was assigned to the inner sanctums of Tipoca City when the Separatists staged a bold attack on the cloning facilities of Kamino. She coordinated the surface defense of Kamino with Prime Minister Lama Su, approving the activation of the elite ARC troopers during the assault.

General Ti also led a detachment of clone troopers at Brentaal IV. There, she came face to face with Lyshaa, her Padawan's killer, who escaped incarceration in the confusion of the Clone Wars. Ti tried to use Lyshaa's Zeltron persuasion abilities to convince Confederacy commander Shogar Tok to stand down peacefully, but Lyshaa betrayed and shot Ti.

Ti's Jedi powers kept the wounds from being fatal, and she was forced to kill the Separatist commander. Demonstrating the strength of her Jedi resolve, she chose to spare Lyshaa for the betrayal. Lyshaa, disbelieving, attempted to flee, only to be killed by an automated laser trap.

Supreme Chancellor Palpatine himself officially commended Shaak Ti for her efforts and notable actions on Dagu, Geonosis and Centares.