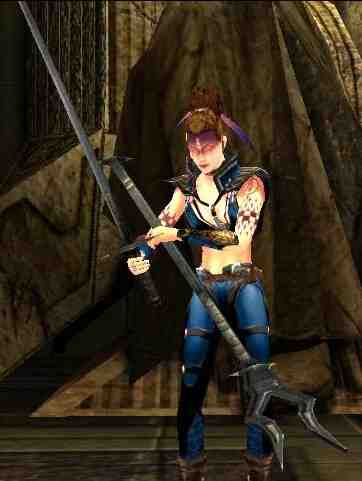 Dark Side Artifact: The Sceptre is a powerful artifact of dark side power and automatically gives a dark side point to any being that attempts to use it for any purpose. The Sceptre seems to be constructed in a similar manner to Sith Swords and actually contains a Sith Sword within its handle.

Drain Force: The Sceptre can be used to drain an area or object of the ambient background force which it contains, this has little effect on most objects but Force Nexus and Artifacts can be completely drained into the Sceptre giving it energy with which it can use its next Special Ability.

Imbue Force: The Sceptre can take force energy gathered into it and empowered another object or person with it, if it has enough power from drained Force Nexus it can turn people force sensitive or add their ability to use the force. However the Sceptre corrupts the energy it has gathered turning it to Dark Side energy, so even if has harnessed the energy of a light side nexus, then the energy it imbues will be Dark Side. The Sceptre can add multiple dice of energy to targets enhancing their power and ability in the force, however the more powerful the being it attempts to enhance the more energy it requires. The effect of this ability is maintained by the Sceptre, so should it ever be destroyed all power imbued would disappear fading quickly, although it is not known if the power returns to its original source or if it remains corrupted.

Resurrect Dark Sider: The Sceptre can regenerate the body of a Dark Sider from its remains, making it capable of living again. Once the body is whole and healed once more by the power of the Sceptre, its flesh totally regrown, the Sceptre can then channel the spirit of the Dark Sider back into its body and make them live once more. The Dark Sider is however dependent on the Sceptre for their life, since should it be destroyed then the Sith is freed once more, and the body crumbles away to dust and bones again.

Description: This ancient Sith sceptre was constructed by Sith magicians thousands of years ago for purposes unknown. It was only ever seen in the galaxy at large in the hands of the Cult of Ragnos. It had the unique ability of being able to draw the Force out of anything, including nexus's of the Force, and storing it in itself. To gain the Force, it shoots out a yellowish beam at the target, which will slowly drain the Force out of whatever it hits and into the sceptre. If this beam hits a sentient being then it will knock them out unless they are very strong in the Force and are able to resist it. This raw Force power can then be used for 2 things. Firstly, and most commonly, it can be used to give non Force-users the same control of the Force as a fully trained Sith or Jedi would have. Secondly, it can be used to bring back dead Dark Side Spirits as long as you have their original physical body. To do this is both heals the original body upto a state to allow it to live again, and then it fully integrates the Dark Side Spirit back in with it's original body. Unfortunately, both of these abilities are completely dependant on the sceptre not being destroyed, for if it is destroyed then both of the above abilities are reversed, the dead will return to their original state, and the Force-users will have their control of the Force taken away. The final ability of the sceptre itself is the ability to create a sonic boom when hit off of solid objects at a great intensity, knocking anything it hits and possibley doing damage to what it hits also. The hilt of the sceptre is actually the hilt of a hidden Sith sword which, when pulled out of the sceptre it is hidden in, will start to pulse with red lightning, doing great damage to anything it hits. Both the sword and sceptre are made by Sith alchemy and, as such, can withstand any Lightsaber hits done to them without taking any damage. Unfortunately for the Cult of Ragnos, this sceptre was destroyed by the newly trained Jedi Knight Jaden after a tense battle with the leader of the Cult, Tavion, who was possessed by the spirit or Marka Ragnos in Ragnos's tomb. The remains of the sceptre were then lost in the tomb when its entrance was destroyed, burying it forever, however it is always possible that the artifact could be repaired by a skillful enough Dark Sider or that other examples of this device might exist in other ancient Sith ruins.


Page designed in Notepad, logo`s done on Personal Paint on the Amiga.
Descriptive Text by Jaymach Ral'Tir, stats by FreddyB. Image is from the game Jedi Academy, copyright remains with LucasArts.
Any complaints, writs for copyright abuse, etc should be addressed to the Webmaster FreddyB.