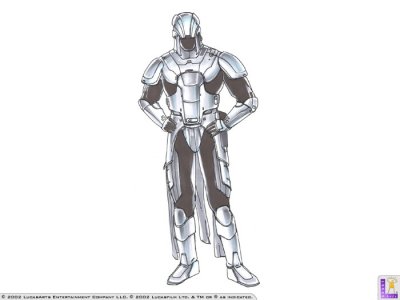 
While the majority of the battalions now under Sith command are comprised of traitorous Republic forces, they are far from hodge-podges of disorganized troops. Only the strong are granted acceptance into the ranks of the Sith army; those judged too weak to be of use are put to an ignoble end. Traitors may be welcomed into the ranks, but a level of fear is quickly established to make certain they are not so quick to change sides again.

Functionally, the armor of the Sith trooper is just as protective as most Republic equipment, but it has also been carefully designed to inspire dread. Armor plating is presented more obviously, making it appear more imposing, and the features of the wearer are completely obscured to make them a faceless inhuman entity. A Sith trooper is perceived as an extension of the Sith, and even in close combat an opponent sees only the cold faceplate of the helmet, never the soldier inside.
Dex: 2D
Blaster: 6D
Dodge: 6D
Melee Weapons 6D
Melee Parry: 5D


Page designed in Notepad, logo`s done on Personal Paint on the Amiga.
Text by FreddyB. Image and Descriptive Text from Knights of the Old Republic, copyright remains with LucasArts / BioWare.
Any complaints, writs for copyright abuse, etc should be addressed to the Webmaster FreddyB.