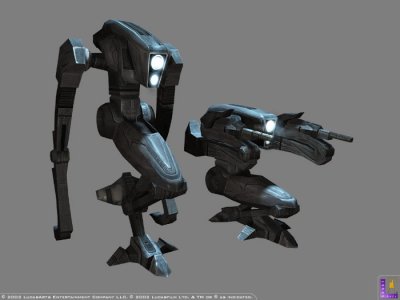 Description: Built using the Rakatan force powered technology of the StarForge using designs from the massive stations memory banks, these powerful combat droids were the most advanced technology that the Sith forces plundered from the records of the Rakatan Eternal Empire. With twin Blaster cannons for ranged combat, and heavy hooks for use in battle, these droids were capable of smashing most opponents apart from Jedi Knights. The Sith only used these droids against Jedi, protecting their Leviathan Class Destroyers against boarding actions and for eliminating target Jedi, managing to resist the devastating lightsaber damage dealt by their opponents with their force shields and armoured plating. These droids saw their most important battle aboard the StarForge itself, when the Revan returned to the station to kill his former apprentice Darth Malak.


Page designed in Notepad, logos done on Personal Paint on the Amiga.
Text by FreddyB. Image is from Knights of the Old Republic. Copyright remains with LucasArts / BioWare.
Any complaints, writs for copyright abuse, etc should be addressed to the Webmaster FreddyB.