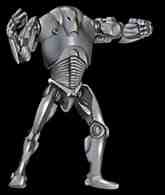 Description: When the Trade Federation ands the Banking Guilds joined together in alliance with the Genosians and Count Dooku, their combined technological skills and resources allowed them to build a better soldier than the Trade Federation Battle Droids that had been used in the Battle of Naboo. The Super Battle Droid was an extremely powerful combat droids, which combined advanced logic matrices with inbuilt weapons and rugged armour plating. These droids while not as dangerous as the Trade Federation Droideka's, filled a gap between those and the weaker Battle Droids, letting the Confederations forces become more flexible and adaptive, making them a true menace to the Old Republic.