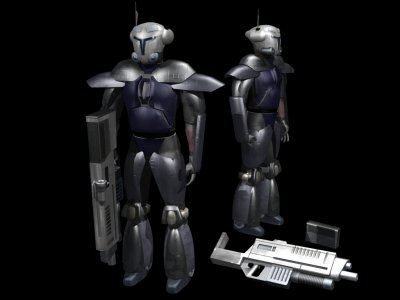 Winch:
Attached to grapple, has 100kg capacity (wearer and his equipment).

IR/motion Sensor:
+2D PERC in darkness and/or against moving targets, ahead and to both sides.

Environmental Filter:
Filters out most harmful particles from the air or seal with five hours of air.
Stealth System:
Boosts Sneak and Hide skills by +2D.

Description: Similar to the Heavy Commando Armour, this is a heavier powered set used exclusively by the Mandalorian Super Commandoes who specialise in assaulting enemy positions and working behind enemy lines. With many similar features including sensors and weapons, the Super Commando armour has more powerful muscular enhancement and advanced stealth systems which help the wearer avoid detection. These suits are not available to anyone outside of the Mandalorian Super Commando corp's, and are rarely seen in operations as the Mandalorian government would like to keep the technology and capability of these suits as secret as possible.

Page designed in Notepad, logo`s done on Personal Paint on the Amiga.
Text by FreddyB, based on the Mandalorian Sourcebook by "Talon^Karrde".
Image is by "Bob the Dinosaur", and copyright resides with him.
Any complaints, writs for copyright abuse, etc should be addressed to the Webmaster FreddyB.