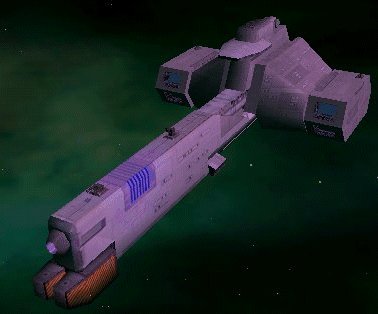 Transports: 70 (starfighters were not in use when this vessel was designed, so some of the landing bays would now be used for fighters.)

Description: The Sword of the Jedi was built some seven thousand years before the battle of Yavin, designed to carry the Jedi and their families to trouble spots around the galaxy it was intended to become a mobile Jedi Academy. The vessel was co-funded by the Republic and the Jedi council, and crewed by Republic soldiers, although technically under the direct command of the Jedi Council and featured some of the best technology available at that time. It was a massive capital ship, based around the first known example of a Turbo Laser, which was the first laser weapon capable of handing out significant damage to a Capital ship, however the size of this weapon, measuring over 2 kilometers in length, forced the size of The Sword of the Jedi to be huge. The vessel was also equipped with early force shields, a powerful (for its time) hyperdrive system, and the common weapons of its time, Laser Cannons for dealing with smaller vessels, and conventional Concussion cannisters for dealing with capital ships. The Sword of the Jedi turned out to be hugely expensive, and fairly pointless, since there were few reasons to need to transport thousands of Jedi anywhere, so the vessel was forced into a publicity role (touring star systems to show that the Republic was protecting them) and use as a large cargo vessel. It was on a classified and secret cargo delivery run that The Sword of the Jedi disappeared on, brief searches occured, but the Sith Wars weren't far off, and The Sword of the Jedi passed into legend.


Page designed in Notepad, logo`s done on Personal Paint on the Amiga.
Text completely by FreddyB. Image is by Origin, copyright resides with them.
Any complaints, writs for copyright abuse, etc should be addressed to the Webmaster FreddyB.