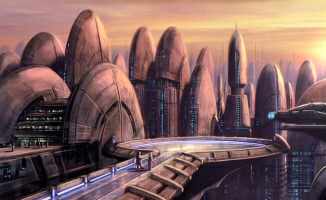 
Taris was once a galactic hub, being situated on the intersection of important hyperspace trade routes. However, prior to the Jedi Civil War several new, shorter routes were discovered, rendering Taris unnecessary. The planet began to decay, but still remained quite important in galactic life.

It is believed the swoop bikes first originated on Taris, where swoop racing captured the imagination of the galaxy circa 4,000 BBY. Using an intricate system of hyperspace beacons, Taris race organizers would broadcast the results of the swoop races throughout the galaxy which eventually gave rise to a huge and profitable gambling operation. Taris remained a hub for swoop racing for decades, despite opposition from the Hutts and other criminal organizations.

The city of Taris was usually divided into three levels: the Upper City, the Lower City and the Undercity.

The Lower City was home for poorer people, and non-humans were common there, especially in Javyar's cantina. Another Hutt, Zax, placed bounties and rewarded successful bounty hunters on behalf of his de facto boss, Davik Kang. Control over the Lower City streets was the subject of rivalry between swoop gangs — gangs whose pilots competed in swoop racing, a popular kind of sport on Taris and some other planets, among them Tatooine and Manaan. The most notable swoop gangs were the Hidden Beks, led by Gadon Thek, and the Black Vulkars, led by Gadon's adopted son Brejik, who was characterized by Mission Vao as a traitor because he was a former Hidden Bek. Mission and Gadon believed Brejik to be responsible for the ongoing street war between the Beks and the Vulkars.

The Undercity, a village on the ground level beneath the immense skyscrapers of Taris, was a dark, wild area inhabited by the Outcasts — people whose predecessors were banished from the city for their crimes. The Outcasts never saw the sky in their miserable life, and nobody hoped that their life would ever turn for the better… except Rukil, an old man who was considered crazy by the rest of the village because of his stories about the Promised Land, a self-sufficient colony built long before the foundation of the Undercity. Nobody believed in these stories, and most villagers considered them tales created with the purpose to give people false hope.

The wilderness around the Undercity village was extremely dangerous because of rakghouls, semi-humanoid beasts that could infect humans with the rakghoul disease. The Outcasts had to keep infected people isolated from the rest of the society because they would inevitably mutate into rakghouls.

Taris was a base of smuggling operations for the Exchange and its representative, the local crimelord Davik Kang. Davik was quick to get rid of his debtors who were unable to pay their debts, sending his personal bounty hunters — among them such notable figures as Calo Nord and Canderous Ordo — to deal with them. The bounty hunters, the only ones permitted to meet with Davik himself, kept Taris in terror.

Although Taris was not officially a member of the Galactic Republic, both the Republic and the Sith understood the importance of controlling the planet. Prior to the Jedi Civil War, Republic scientists developed a serum which was able to cure the rakghoul disease, to prepare Republic soldiers for operating in the surface wilderness.

However, the Republic's plans were disturbed by the Sith, who invaded the planet and established a military blockade around it, letting no ships to leave the planet. The Sith ravaged the Republic facility researching the rakghoul disease was and "liberated" the serum, which was then used to protect Sith patrols venturing around the Undercity.

In an attempt to break through the blockade, the Republic dispatched a fleet bolstered by Bastila Shan's Battle Meditation. However, Bastila's ship, the Endar Spire, was unexpectedly ambushed and boarded by the Sith. Bastila had to leave in an escape pod; Carth Onasi and memory-wiped Revan (whose true identity was unknown to everyone on the ship except Bastila) followed her some time later, moments before the ship exploded.

Bastila's pod landed outside the Undercity; the Black Vulkars were the first to reach her, capturing her (at least they thought so) and putting her as a slave and a prize for the swoop racing champion. Revan and Carth landed in the Upper City; cooperating with Mission Vao and her Wookiee friend Zaalbar, they managed to discover what happened to Bastila. Revan participated in the swoop race, and a prototype engine accelerator developed by the Hidden Beks allowed him to win. Brejik, however, accused Revan of cheating and refused to release Bastila, but she easily broke out of her cell herself, using the Force, and helped Revan to eliminate Brejik and his Vulkar guards.

Seeking a way to escape the planet, Revan contacted Canderous Ordo, who came with a plan to infiltrate the Sith base and steal the launch codes which could allow a ship to safely bypass the military blockade. Revan was able to accomplish this using Janice Nall's newest utility droid, T3-M4, to break through the base security gates. The crafty Revan was even able to defeat a dark Jedi apprentice, who was acting as the governor of the region, despite not being re-trained in the ways of the Force.

Meanwhile, Darth Malak, Dark Lord of the Sith, concerned about the search for Bastila taking too long and fearing that she could escape Taris, ordered Admiral Saul Karath to "wipe this pathetic planet from the face of the galaxy". The Sith fleet was regrouped and began massive artillery bombardment of the planet's surface.

Canderous led Revan to Davik Kang's secret estate, where the crimelord kept his ship, the Ebon Hawk. To get to the ship, Revan and Canderous had to kill Davik and severely injure Calo Nord, who was left for dead. The Ebon Hawk left the hangar just before Davik's estate was destroyed with the rest of the Taris city.

It is unknown what happened to Taris after the Jedi Civil War, and whether it was ever repopulated. Darth Malak's bombardment had thoroughly levelled the Upper City area, and as Carth Onasi stated, everything over two stories high was reduced to rubble. It was speculated, though, that some of the Lower City and Undercity inhabitants managed to survive the bombardment.


Page designed in Notepad, logos done on Personal Paint on the Amiga.
Stats by FreddyB. Descriptive Text and Image is from Wikipedia Copyright resides with LucasFilm.
Any complaints, writs for copyright abuse, etc should be addressed to the Webmaster FreddyB.