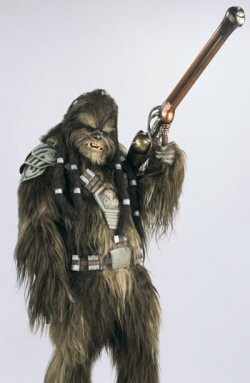 
Tarfful has served as the city leader of Kachirho for decades. His role in civic leadership has not blunted his warrior's edge, as he stayed in shape through vigorous exercise and dangerous hunting expeditions. During the Clone Wars, Trandoshan slavers took Tarfful prisoner, but a crack squad of Republic clone commandos secured his freedom as well as his respect and loyalty.

When the Clone Wars came to Kashyyyk, Tarfful adopted the little used mantle of war chief, shoring up defenses around the coastal city. The Confederacy had previously attempted a number of tenuous stabs onto Kashyyyk's surface, but Kachirho held the most promise.

A city in the Wawaatt Archipelago dominated by freshwater lagoons, Kachirho was not as obscured by enshrouding jungle canopy as the more inland Wookiee settlements. This made for easier orbital insertions, and both the Republic and the Separatists targeted Kachirho as the ideal point to mount a land campaign. When Tarfful sounded the alarm to protect Kachirho, many Wookiees from other cities trekked to the coasts to the defend the city. Among them was Tarfful's old friend, Chewbacca.

Tarfful worked closely with Jedi Masters Luminara Unduli and Quinlan Vos to set up the initial defenses and allocate the Wookiee warriors at his disposal. While he did not serve as the battlefield general, he was nonetheless the direct liaison with General Yoda upon the venerated Jedi Master's arrival. Tarfful greatly respected Yoda, and considered him to be a member of his "honor family."

The mighty Wookiee warrior named Tarfful helped the Republic forces defend his native world of Kashyyyk when the Separatists invaded the planet during the Clone Wars. The fierce and towering Tarfful served under the command of the wise Jedi Master Yoda, who had fostered a close relationship with the Wookiee people. It was Tarfful who was at Yoda's side on Coruscant as the little Jedi Master organized his task force to Kashyyyk.

When the clone troopers under Yoda's command betrayed him and turned on the Jedi, Tarfful nonetheless remained loyal to the Jedi. Tarfful and his friend Chewbacca assisted Yoda in his escape from the clone ambush, and led him to a secret escape pod that allowed Yoda to flee Kashyyyk.