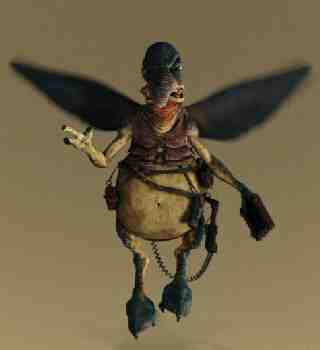 
The murky world of Toydaria is located within the borders of Hutt space, providing its inhabitants with a relatively quiet existance, bothered by only a few outsiders. I say relatively, since the world's lakes and swamps are filled with various large predators. Toydarians have therefore developed the ability of natural flight in order to survive, and reside in the air, high above danger.

These busy skies make space traffic difficult, almost impossible. There is only one spaceport on the entire planet, which is only allowed to be opperational at certain times of day. Trading is minor, and usually with the Hutts.

Toydarians prefer to live their life lowtech anyway, residing in simple villages with scarce technology. Besides an occasional struggle for food, they mostly live a social, peaceful life. Only few ever leave the planet.

An adult Toydarian stands on average between 1 and 1.5 meters. They have thin arms, a broad mouth covered partly by their small trunk, and two stub-like tusks, which point upwards. Their skin is hairless, although males do possess scarse beard growth. Color may vary, but is mostly blue, with a cream colored belly.

They are capable of walking upright on their webbed feet, but prefer to fly at all times, especially when in a warm environment. Newborns can fly from birth, ensuring their immediate safety. Their short wings beat with an average of 10 times per second. On it's own, that doesn't seem to be enough to support their weight, but they are, in fact, extremely light. Their pudgy appearance is deceiving; their entire body consists of spongy tissues, which suck up a gas produced by their special diet. Their bulgy stomach is also filled with this lighter then air substance, aiding them in staying airborne. This ingenious adaptation has only one flaw; it takes up a lot of energy, and they need to eat constantly in order to replenish. A starving Toydarian will lose the ability to fly in less then a day.

Their brain structure, although similar to other alien species, seems to have a strange natural alteration that makes them immune to the Force.

Toydarians are a shrewd species, with a good nose for business. Loyal and very social, they are, unfortunately enough, also greedy, with a tricky and deceitful nature. They often fight amongst each other, but these are mostly minor food-squabbles. Only one onplanet war has been heard of, but details are vague.


Flight: Toydarians fly almost straight from the womb, and rarely use their legs for locomotion, if for no other reason than prefering to meet other species at eye level.

Force Resistant: Toydarians minds are highly resistant to influence from the force, like many species from Hutt Space. They are immune to mind control and mind reading powers, although can be as easily effected by other powers as anyone else.


High Metabolism: Toydarians need to eat their specialised diet regularly and heavily, or else they lose their ability to fly within a day or so. However this is regained just as quickly upon them resuming their normal diet.

Greedy: Toydarians are by nature greedy and deceitful, however this is not a massive disadvantage within the galactic community where the majority of people and species exhibit similar tendencies.

Page designed in Notepad, logo`s done on Personal Paint on the Amiga.
Stats by FreddyB, descriptive text from bejedi.com. Image is by LucasFilm, copyright resides with them.
Any complaints, writs for copyright abuse, etc should be addressed to the Webmaster FreddyB.