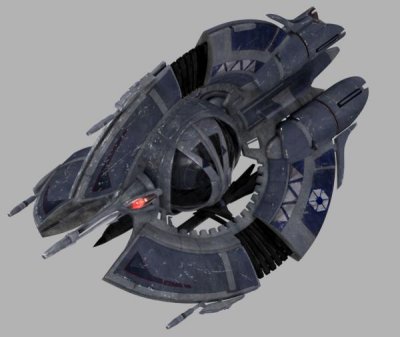 Description: When the Separatists attacked Coruscant in the twilight of the Clone Wars, they employed as many different and cutting edge combat starship designs as they could to better the chances of victory in their most bold and daring strike. Swarming from the hangar bays of Confederacy battleships were tri-fighters, automated starfighters equipped with groupings of four blaster cannons. The bracing arms surrounded a rotating gyroscopic ball that housed the droid's brain.

The fully automated tri-fighter is bigger and less maneuverable than the slim vulture fighters, but nonetheless posed a threat, particularly to the slower ARC-170 fighters.

The tri-fighter derives its name from the triple support arms that steady its primary cannons, and it derives these arms from the skull shape of a predator native to the world of its designers. The Colicoid Creation Nest, the same amoral cannibalistic insectoid designers responsible for the deadly droidekas, designed the tri-fighter. Also contributing to its name is the array of triple independent thrusters that afford it its agility.

The tri-fighter brain is more sophisticated than that of the vulture droid starfighter. Its robust power planet and advanced communication transceiver give a tri-fighter impressive operating range for a non-hyperdrive equipped automated starfighter.


Page designed in Notepad, logo`s done on Personal Paint on the Amiga.
Descriptive text from StarWars.com, Stats by FreddyB. Image is by Lucasfilm, and copyright resides with them.
Any complaints, writs for copyright abuse, etc should be addressed to the Webmaster FreddyB.