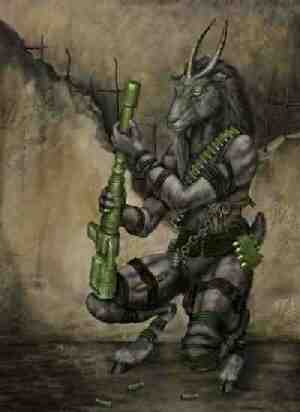 
The Ursg are a warm blooded species evolved from a goatlike creature, and although they share many features with humans they bare many symbols of their genetic history. Their bodies are covered with a thin layer of fur which insulates them from their environment menaing that although they wear some clothing for decoration or utility they do not need it for everyday use. They also have a set of horns on their heads which can be used to great effect in hand to hand combat, although as a civilised species they prefer to use weapons and equipment.

The Ursg homeworld has rich levels of Hyperbarides deep within its crust, these are needed for the construction of hyperdrive systems and other faster than light systems such as communications and sensors. The large quantities of these rare elements made the Ursg very rich and influential within the Old Republic, but they found this influence waning with the founding of Palpatines New Order. The Ursg reacted to this by cutting their sales of Hyperbarides to the Empire, which in turn triggered an Imperial invasion of the Ursg homeworld.

Unlike most species subjected to full scale Imperial invasion the Ursg did not roll over and give up, the natural stubbornness of the species caused a revolt against their Imperial invaders. With many thousands of Ursg taking up arms against the Imperial forces on their world, and although this increased the cost of mining the Hyperbarides the rarity of these elements meant that it was still worth it for the Empire.

The Ursg with the help of the New Republic managed to free their world from Imperial rule, although the strip mining of the Hyperbarides has left areas scarred and heavily radioactive, while the cities were in ruins from the combat. Many of the Ursg freedom fighters now fight with New Republic forces to free other worlds from Imperial rule, although the Ursg now are attempting to use the riches their world has to rebuild and repair the damage done during the Imperial rule of the planet.


Fur: The Ursg have a thin layer of insultating fur which helps them be more resistant to cold conditions, gaining them a bonus 2D to their strenght to resist the effects of cold.

Horns: The Ursg have twin horns atop their head which can be used to cause significant damage in combat doing Str+1D damage.


Imperial Invasion: The Ursg homeworld was invaded by the forces of the Galactic Empire for its valuable resources, the Ursg people rebelled against their rule and joined with the forces of the Rebel Alliance to remove the Imperial forces from their planet. Most Ursg are still strong supporters of the Alliance and the New Republic, although some rare individuals of the species were known collaborators and gained power and influence from the Imperial rule.