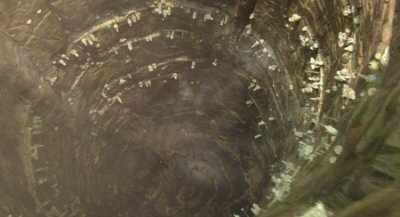 
Located in the Tarabba sector, Utapau is an old world that fostered a primitive interstellar civilization prior to the formation of the Republic, almost sixty millennia before modern times. The planet had steadfastly avoided galactic prominence during all that time, steadfastly avoiding politics and war with a stance of quiet neutrality. Utapau only entered into notable offworld trade agreements within the last few decades, when offworld water- mining companies had discovered that the waters of the polanet were rich in dissolved trace elements said to foster health and longevity.

Despite appearances, Utapau was not a true desert planet. An underground ocean circled the entire planet, pulled to and fro by the tidal forces of nine moons. The movement of this sunken ocean eroded away at the porous crust, causing frequent groundquakes that collapsed sections into plunging sinkholes.

It was in these subterranean levels that the native Utai carved an underground society, while on the surface plains, the taller Pau'ans developed. As climactic changes forced the Pau'ans to follow the water and animals below ground, and avoid the ever- increasing hyperwinds that swept the surface, the Pau'ans and Utai made first contact and eventually established a peaceful and mutually beneficial society.

Ringed by numerous moons, the remote sanctuary of Utapau is a planet pitted with enormous sinkholes. Its windswept surface is dry and desert-like, but deep in the porous crust, at the bottom of the sinkhole are pools of life-giving water. Many of the sinkholes on one of the planet's small continents are lined with intricate cities that stretch deep into caves and crevices beneath the planet's surface.

The world served as a base-of-operations for the ever-mobile Separatist Council, the assembled trade and commerce barons in command of the Confederacy of Independent Systems. The Confederacy had conquered the native Utapauns, who peacefully submitted to their rule.

Following a daring yet failed attempted to kidnap Chancellor Palpatine from Coruscant, General Grievous fled to Utapau to lie low. A converted Trade Federation coreship served as a command center, perched on the tenth level of one of the largest sinkhole cities on the planet. Here, thousands of droids -- including battle droids, super battle droids, vulture droids, octuptarra droids and crab droids -- stood ready to defend the outpost.

A diplomatic packet from the Chairman of the Utapau system was intercepted by one of the Republic's elite clone intelligence units. Though the Separatist Council was safely shuttled away from Utapau, General Grievous was confirmed to be on the planet. The Jedi Council dispatched General Obi-Wan Kenobi and his clone forces to Utapau in the hopes of capturing Grievous and finally ending the Clone Wars.

Kenobi arrived on Utapau, making contact with Port Administrator Tion Medon. Medon quietly informed the Jedi of Grievous' whereabouts, and Kenobi voyaged to the tenth level on the back on a loyal native lizard named Boga. There, clone forces engaged the Separatists, and the underground Utapaun resistance joined the fight.

Though Grievous was killed, sweeping political changes on Coruscant rippled outwards to Utapau. Chancellor Palpatine declared the Jedi enemies of the state, and the clone troopers attacked Kenobi. They then occupied Utapau, rounding up the local resistance fighters.