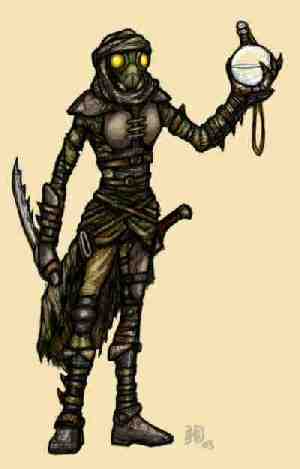 
The Vangrit are a desert dwelling race of insectoids, who are traders by nature. Their species developed on their harsh and dry homeworld where water was extremely rare, and became the ultimate wealth for the species which developed there. The Vangrit used their intelligence to rise to the top of the food chain, and as their culture developed they became vegetarian by choice, and they began to settle in cities instead of their previous nomadic lifestyle.

They began space flight within the last few centuries and were conducted into the galactic community soon after, making use of their natural talents to join the mainstream of galactic society. They had little of interest to the Empire, but Vangrit ended up on both sides of the civil war making deals and making profit for themselves and their chosen side of the war.


Traders: The Vangrit deal and trade almost from birth, loving the rush and skill involved in making the perfect deal, the constant use of this gives them a bonus 2D to Bargain skill.


Desert Dwellers: The Vangrit homeworld is a dry and dusty place, and the Vangrit evolved to survive in such a place. They feel uncomfortable in the presence of large bodies of water, and have been known to become ill if they get too damp (although this is easily treated with modern medicine).