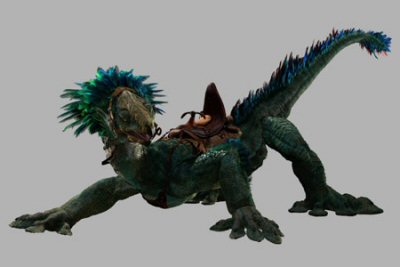 Special Abilities
Stealthy: Varactyls are naturally quiet and stealthy creatures, capable of moving around in near total silence. They gain a bonus +2D to their Perception for sneaking or stealth related dice rolls.
Diurnal: Varactyls are cold blooded and operate best during the heat of the day, at night they become sluggish, losing 1D from their Dexterity and Perception attributes, and 4 points from their move.

Description: Cold-blooded lizards that sun themselves on the sides of the Utapaun sinkholes, varactyls are well-evolved to survive in the vertical environs of their native planet. During daylight hours, varactyls are very active, scrabbling upwards on the craggy surfaces to catch the slanting daylight as the lower levels of the sinkhole are plunged into darkness. It is during the day that a varactyl feeds, snapping up rock-hugging green-muck from the lower, wetter levels and cracking through the softer sandstone in the drier heights to get at the succulent arterial roots that permeate the porous rocks.

At night, varactyls become sluggish. At this point, they are vulnerable to predacious species, like the flying dactillions who feed on varactyl eggs and hatchlings. For protection, varactyls horde together at night in the crevices of the sinkhole environ, preserving their fleeting body warmth in numbers. Though adversaries in the wild, domesticated varactyls and dactillions can be corralled together.

It was undoubtedly at night that brave Utai roped their first varactyl in prehistoric times, marking the domestication of the lizard mount that greatly changed the Utai culture. With varactyls under their control, Utai could venture far beyond their usual home levels, exploring the upper strata of the sinkholes and even bravely venturing onto the windswept surfaces, making first contact with the taller, stately Pau'ans.

Varactyls have waterproof scaled skin and are powerful swimmers. They only brave the grotto depths at midday hours, when the Utapau sun shines directly overhead, casting abundant sunlight directly to the bottom of the geologic shafts. To swim in later hours exposes the varactyl to grotto dangers such as the predatory nos monster.

Though typically even-tempered, if attacked, a varactyl is capable of defending itself. Females have a fan of rigid spines along its tail providing defense; the erect spines would hurt any creature attempting to bite at the tail. Varactyls have great strength, and their heads are protected by an armored skull of dense bone.

Some of the defensive spines of a varactyl have softened into feathers used primarily as in mating and threat displays. Males use a mid-body ridge of spines to display in courting rituals. Both genders have feathers but female plumage and overall coloration tends to be more vivid and striking.

With its plunging sinkholes, layered city levels and sheer cliff- faces, the remote world of Utapau can be difficult and hazardous to navigate. When Obi-Wan Kenobi came to the planet in search of General Grievous, he relied on native know-how to scale the sinkhole walls to track the droid general to his Separatist command center.

Kenobi went to the pens where Utapaun wranglers corralled native winged and wingless lizards for use as transports. From the livery he selected an obliging and brave lizard named Boga, with a leather saddle strapped to her swaying back.

She stood four meters tall at the shoulder, and had a pebbled skin with an iridescent green and blue sheen. A crown of richly colored feathers fringed her head and neck, trailing away from her beaked face and keen eyes. Her powerful limbs ended in five-toed feet, tipped with curved claws providing excellent purchase on the sandstone surfaces. A long tail aided in balance and agility.

Though a large creature, Boga had a silent tread, quiet enough to sneak into the rafters of the tenth level compound of General Grievous. There, Obi-Wan was able to confront the Separatist commander. As their duel erupted into a chase, Kenobi called for Boga and the loyal creature carried the Jedi general in pursuit of Grievous.

Her stride was swift enough to keep pace with Grievous' wheel bike as it tore through the avenues of the sinkhole city. Boga was brave and trusting enough of Kenobi's command to perform daring leaps and close with Grievous' dangerously spiked conveyance.

When Order 66 was enacted, Kenobi's clone trooper battalions turned on him. A laser turret targeted Boga. The near-miss knocked the lizard and her rider off the cliff-side, sending both plunging into the sinkhole grotto.