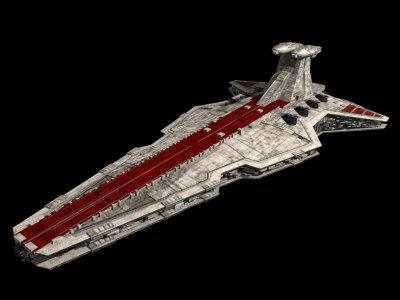 Description: Despite a millennium of peace and complacency, the Republic quickly transformed itself into a formidable war machine when the threats of the Separatists escalated into the Clone Wars. The difference made by a few years was astounding; by channeling enormous resources in the name of security, the Republic developed fleets of immense warships, many with cutting edge designs.

The Republic attack cruiser, or Star Destroyer, gave this new starfleet its considerable teeth. The wedge-shaped warship was not primarily a cargo transport, troop carrier or other replenishment or supply vessel; it was developed and honed for ship-to-ship combat. Its huge armored shape had an aggressive, dagger-like profile, studded with heavy weapons emplacements capable of punching through powerful shields and sturdy armor. From its twin elevated conning towers, the crew of clones and other Republic military officers oversaw the craft's operations.

The front half of the ship's dorsal surface contained a massive flight deck capable of scrambling the latest in Republic starfighters. The huge hangar doors opened to allow ships to land or takeoff from the deck; the vessel also had a smaller docking bay entrance on its ventral surface.

These attack cruisers formed both the backbone and aggressive front of defense around Coruscant during the bold Separatist push to infiltrate the capital. Many destroyers crowded the atmosphere above the city planet, engaging enemy battleships, often at point-blank range. These attack ships also served as command vessels for Jedi Generals during remote operations, such as Yoda's mission to Kashyyyk and Obi-Wan Kenobi's search for General Grievous on Utapau.

Kuat Drive Yards quickly positioned itself as the preeminent supplier of powerful warships to the Republic during the Clone Wars. Its secret development subsidiary, Rothana Heavy Engineering, had clandestinely constructed the first generation of military hardware for the Grand Army of the Republic. When that army was publicly revealed during the Battle of Geonosis, Kuati executives were quick to downplay Rothana's name, crediting the whole venture to the foresight and inventiveness of the parent company's leadership. A media saturation campaign crediting Republic victories to the ships of Kuat Drive Yards helped spread this message across the galaxy.

The Venator-class Star Destroyer was one of several wedge- ship designs to come out of the development think-tank led by engineer Lira Blissex. At over a kilometer in length, it was big and powerful enough to tangle with the Separatist fleets, but it was also quite fast. Its huge reactor-powered sublight engines afforded the Venator-class Star Destroyer respectable speed, enabling it to chase down blockade runners and smaller combat vessels.

Though it was capable of making planetary landings, this versatile Star Destroyer was used mostly as a spacebound fighting ship. This meant its hangars were stocked with starfighters rather than ground craft. Its standard complement included 192 V-19 Torrent or V-wing fighters, 192 Jedi starfighters, 36 ARC-170 fighters, and 20 LAAT/I gunships.

While the Venator Star Destroyer offered much for its developers to take pride in, the relentless taskmaster Blissex was not content. She had bigger plans in mind. She used her past successes to green-light the ultimate warship of her dreams, the Imperator-class Star Destroyer. Shortly after the end of the Clone Wars, the first test-bed models of this mighty warship were already functioning in classified Imperial shipyards accessible only the New Order's elite.

After Blissex's marriage to Denn Wessex, one of Palpatine's first regional governors to be installed, she used her newfound political clout to prioritize the expansion of the Star Destroyer program. From these early designs, the final Imperial-class would forever change the way order was maintained in the galaxy.


Page designed in Notepad, logo`s done on Personal Paint on the Amiga.
Descriptive Text from StarWars.com. Stats by FreddyB. Image Copyright resides with Lucasfilm.
Any complaints, writs for copyright abuse, etc should be addressed to the Webmaster FreddyB.