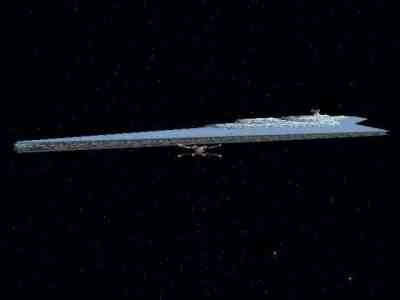 
The Vengeance is a uncompleted Super Star Destroyer located in the Pomiet Star System, which has been claimed by fringe elements and now acts as a hive of illegal activity such as piracy and smuggling.

The Ship Yards in the Pomiet Star System were a secret back up to the main Imperial Ship Yards of Kuat, Pomiet being a uninhabited system with a single Type-I atmosphere world, and a gas giant. The Empire had a small garrison here, but as the Galactic Civil War raged Imperial advance planners became worried that a terrorist attack against the Kuat System could cripple Imperial capital ship production for months or years, so they decided that a secondary production facility should be built. Although this facility would not have the capabilities of Kuat, it would still be able to produce a couple of Star Destroyers each month which would help the Empire through any crisis. It was for this task that the Pomiet system was chosen, and the garrison began to expand into a support facility for the orbital ship yard that was being built.

The first Super Star Destroyer in production, the Vengeance, was months from completion when the New Republic located the Pomiet shipyards and attacked. The battle was bloody, but the Empire was forced to abandon the shipyards and the system, and the New Republic took stock of the situation in the system. The Shipyards themselves were unsalvagable from combined Imperial sabotage as they retreated and battle damage, the planet although livable was hazardous, as sections of construction platform rained down onto the surface, and the Vengeance itself was far from useable. So the Republic fleet continued on its way to the next battle, and the Pomiet system was abandoned.

Salvage teams were the first to follow the Republic into the system, drawn by the massive amounts of salvage remaining. Their stories of an abandoned Super Star Destroyer drew other fringe elements to the system. And the Vengeance was taken over as a space station by a fringer captain called Thade Ausics, who paid top money to ex-imperial crew who would work for him repairing and maintaining the Vengeance.

After a few months, the Vengeance made its one and only journey, using its manuevering thrusters it slowly crawled out of the smashed docks which held it, and moved into open space, where it remains to this day. The Vengeance now acts as a Pirate base, and smuggling center, a safe place to trade in illegal contraband near to the major trade centers of Corellia and Duro, but not under the control of any government.

Aboard the Vengeance it is obviously unfinished, with holes in the walls showing wiring, lights flickering everywhere and rubbish piled up against the walls. Docking fines are charged for those using the vessel, but cargo isn't assessed, security and safety are the concerns of yourself once you come aboard although many bodyguards can be hired.

The cargo holds of the Vengeance have become huge open markets, with stalls and traders crowding every space, but the rest of the ship is open to visitors as well, although security is tight around the command tower, which Ausics uses as his base, and as the ships rudimentary flight control center. The operational weapon systems are manned by droids, who are welded into the weapon control rooms, and recieve commands from the bridge. The only other off limits area of the ship is the engine room, which provides power for the titanic starship, this is fortified with laser cannons and armour plating in an attempt to keep it well within Ausics control.

The rest of the Pomiet system is fairly uninhabited, a few people live on the world of Pomiet itself, although it is still fairly dangerous from de-orbiting debris, it is far safer than it was during the first days after the battle. A couple of gas miners have taken over the abandoned Imperial facilities around the gas giant in the system, and they trade the fuel they mine for supplies aboard the Vengeance.

The Vengeance itself appears to be safe for the time being, local planetary governments lack the resources to take on even a partially functional Super Star Destroyer, and the Empire doesn't care since this area falls far outside of its sphere of influence now. The only people capable of taking down the Vengeance is the New Republic, and New Republic Intelligence has asked that it be left alone, because it is easier to monitor all the illegal activity that is occuring here rather than spreading it around the galaxy once more, so the Vengeance is left alone for the moment.