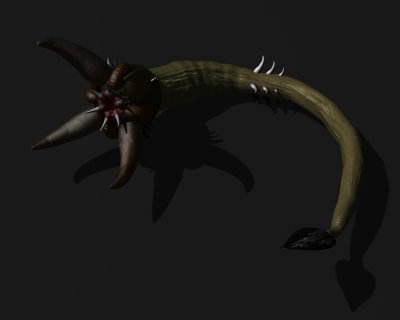 Special Abilities
Fangs: Str+3D damage.
Acute Senses: Although blind, the Vlozquk has senses to make up for it, and has acute hearing, smell and vibration detection abilities, which boost its Search by 2D.

Description: The Vlozquk is a snake like predator which has extremely powerful fangs and mandibles, and although a fairly small animal it is fully capable of killing human sized creatures with ease. Unlike many snake-like animals across the galaxy, the Vlozquk does not have a poisonous bite, but its bite is dangerous enough without this extra. Vlozquks lay eggs and are androgenous, with both partners becoming pregnant from sexual encounters, making this species capable of rapid growth when prey is common enough to support a large population, this rapid population growth has allowed them to become common on a large number of worlds. They do keep their own population in check since members of this species will fight and eat each other, their violent temprament coming to the fore with each other as well as other species. This temprament causes problems for humans as Vlozquks will attack anyone entering their territory even if not hungry, making Vlozquk infested forests dangerous places and forcing governments into culling practices to keep the Vlozquk population down. Vlozquk live mainly in temperate forested terrain, not being comfortable in higher or lower temperatures, although they are happy enough in grasslands and other terrains which enable them to hide, prefering to ambush their prey since they do not have the speed to chase and capture prey.