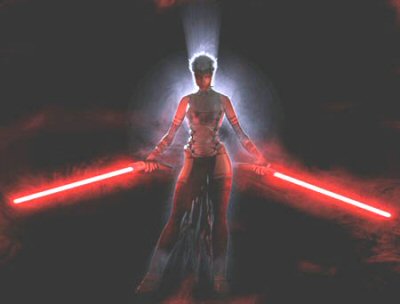 
Like all Jedi, Komari Vosa was taken as an infant to Coruscant to be trained as a Jedi by Master Yoda. She was then apprenticed to Jedi Master Dooku as a Padawan learner.

Vosa was a brash young student with a temper. Never was this more evident than when the Jedi were called to Galidraan to stop the Mandalorian army who were apparently murdering civilians. Komari Vosa killed at least twenty of the soldiers, as she would later boast to the sole Mandalorian survivor, Jango Fett.

The Jedi Council were disturbed by what seemed to be a growing infatuation in Vosa for her master. This, in conjunction with her aggression, was used to deem her unworthy of knighthood. Furious with the decision, Komari took it upon herself to leave Coruscant with four other Jedi on a mission to Baltizaar to save civilians from a cult called the Bando Gora.

The mission was a failure. Two of the Jedi died and the other three, including Komari, disappeared and were presumed dead. In truth, they were captured and Komari was tortured to the point of madness, leaving scars along her back and chin. Vosa eventually broke free, but did not escape. Embracing the dark side, she overthrew her captors and became their leader, proving her worth by executing the other two Jedi captives.

Vosa planned to expand her cult by releasing a death stick with a brainwashing agent.

Vosa was the bounty that Jango Fett was sent to collect by Count Dooku, who wanted to judge his suitability as the prime clone source. Montross, another Mandalorian, was also after the bounty, but Jango Fett killed him and continued to pursue Vosa.

Jango found her on Kohlma, one of the moons of Bogden, but was captured by the Bando Gora. Luckily for him, Zam Wesell (a fellow bounty hunter) turned up in time to rescue him. He fought Vosa; however, it was Count Dooku himself who Force-choked her to death. Jango collected his bounty. Part of the bargain was that he would be provided with a single clone, unaltered.

With this deal struck, Jango accompanied Dooku to Kamino to be used as the template for a clone army.

Komari's legacy would, in a way, live on as her twin lightsabers were given to Asajj Ventress by Count Dooku as a gift.


Page designed in Notepad, logo`s done on Personal Paint on the Amiga.
Stats by FreddyB, Descriptive Text from Wikipedia. Image is by LucasArts, copyright remains with them.
Any complaints, writs for copyright abuse, etc should be addressed to the Webmaster FreddyB.