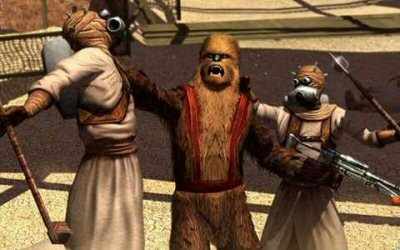 
The city world of Taris was a strange place to find a Wookiee, but the mighty Zaalbar managed to create a life for himself there, far from the kilometer-high wroshyr trees of his homeworld. Zaalbar kept his past on Kashyyyk a secret from even his most loyal friends, since the memories of his old life were painful.

Four thousand years ago, during the time of epic battles between the Jedi and Sith, Kashyyyk had come under the heel of the Czerka Corporation. The amoral business titan enslaved the Wookiees, and violated their forests with corporate installations. This infiltration was made possible by a Wookiee accomplice, Zaalbar's brother Chuundar.

Chuundar sold out his people for a lofty position in the new Czerka-controlled Kashyyyk. He even betrayed his father, Freyyr, and turned people against him by declaring him a doddering, senile fool. Enraged, Zaalbar lashed out against Chuundar, and broke an ancient Wookiee code. Zaalbar used his climbing claws in combat. For such a violation Zaalbar was branded a "madclaw," and exiled from Kashyyyk.

Zaalbar eventually ended up on Taris, and for a time it seemed he was destined to end up as an enforcer for one of the many swoop gangs there. But a chance meeting with a young Twi'lek girl named Mission Vao saved him from a life of senseless violence. Mission recognized Zaalbar was more than a lumbering brute and the two quickly became the best of friends. Mission took to affectionately calling Zaalbar "Big Z."

The strange pair grew to be a familiar sight in Taris' Lower City, and whenever the irrepressible young Twi'lek got into trouble, her Wookiee companion was always close by to help get her out.

She more than returned the favor -- when Zaalbar was captured by Gamorrean slavers in the deep sewers of the Taris Undercity, Mission was able to free him with the help of newfound Republic fugitive friends. Zaalbar accompanied Mission as she joined the hunt for Darth Malak and his sinister Star Forge plot. This galaxy-spanning quest would eventually bring Zaalbar back to Kashyyyk, where he was able to face his dark past once and for all.