The Sith were once guardians of the galaxy, warriors who fought alongside the Jedi during the years following the formation of the Republic. They fought side by side for many millennia, until a schism split the two leading to a war between them, the origins of this war are unknown and the Jedi keep no record of the reasons for it. The Sith however do record the history and keep its memory fresh in each new generation, although it is undoubtedly coloured by their own point of view and the telling of it over the intervening millennia will have twisted the truth in it as well.

The Sith tell that they were allies of the Jedi from nearly the birth of both orders, but after thousands of years working side by side the Jedi became jealous of the power and skill that the Sith Warriors had gathered over the centuries, and launched a war of annihilation against the unprepared Sith. The Sith unready for a war against their former allies died in their thousands, the Jedi mercilessly hunted them down and slaughtered them and their defenceless families, until eventually only a few thousand Sith remained. The last few Sith decided to retreat from the Republic, to save both their order and their families from the masses of Jedi murderers that had hunted them down. They loaded their families onto a massive starship, they left a few brave warriors behind to give them the time to escape, the warriors themselves destined to die valiantly battling their now hated enemy.

The Sith starship made a blind hyperspace jump, relying on the will of the force to save their lives and carry them to somewhere that they could survive safely, and it emerged above the world of Korriban. This world they found was inhabited by the Massassi, who made the Sith Refugees welcome, their rulers were powerful sorcerers, who used the dark side of the force to create many spectacular magic's that benefited the entire Massassi people, had much in common with the Sith. So the Sith traded their own knowledge of the force for the Massassi sorcery, embracing the Dark Side of the Force knowing that if they ever faced the enemy that had almost wiped them out they would need every bit of power they could wield.

What is known for certain is that over the millennia that followed the Massassi and Sith peoples interbred, and became co-dependant, eventually emerging as a single species. Although they all resembled the Massassi, the force users of their society remained separate and took the name of the Sith as their own and remained the leaders and rulers of Massassi society, everyone else no matter the level of their birth remained the Massassi people. Although they remembered the Republic and the slaughter they had fled, the Sith had no way of returning as they had no hyperspace charts or jump co-ordinates for their new home. However this state of affairs ended when a Starship emerged from hyperspace around Korriban, this ship was owned and operated by two hyperspace astrogators who made their living searching for shorter routes between systems.

The leaders of Sith society were known as the Dark Lords of the Sith, and one of these, Naga Sadow took advantage of the information in the Navcomputer of this starship to rally the Sith into attacking the Republic and getting their revenge, he achieved this by treachery and murder but was successful in raising a massive attack force. The Sith attack force emerged at the Princess Teta system, which had just joined the Republic, the Republic and the Jedi fought back against this attack, and managed to force off the Sith attack. So Naga Sadow`s fleet returned to Korriban where they found themselves under attack as Sadow`s rule had been overthrown, and his treachery revealed to the other Dark Lords. So the remnants of his fleet were force to retreat into hyperspace once more and they were never seen by the Sith again.

Fearing reprisal attacks from the Jedi, the Sith forced themselves into retreat once more (unknown to the Sith, the hyperspace co-ordinates for Korriban were never recovered by the Jedi). They packed their entire civilisation onto huge starships and set off for deep space, leaving Korriban a dying world from the dark side energies that were concentrated on it. They fled almost a quarter of the galaxy away before finding a world that seemed to be suitable, unfortunately it was already inhabited but these inhabitants were wiped out by the superior fighting abilities of the Sith.

This world they named Korras, and it became home to the majority of the Sith and Massassi peoples, they remainder of their population settled on other habitable worlds and moons in the Korras system. Over the following thousands of years the Sith rejuvenated by their fresh new world expanded into the neighbouring star systems, conquering a large number of species, enslaving the populations and adding them to the Sith Empire. Until eventually some five thousand years after they relocated from Korriban their expanding empire came into contact with the Mandalorian Empire. The two empires both competing for the same systems launched themselves into a war which rapidly became a stalemate, the Mandalorians had the advantage of technology, but the Sith had the advantage of numbers. So while each Mandalorian soldier was worth 50 Massassi, the Sith could easily spare that many Massassi warriors. The main reason for this was the low rate that Sith technology had advanced at, although the Republic, The Empire and the Mandalorians had improved technologies over the intervening millennia, the Sith had not. The Sith themselves tended to concentrate on mastering the force, and the Massassi weren't bred for innovation, this led to the Sith using technology that was little more advanced than that when they departed the Republic. This reduced the Sith to using weapons that were difficult to maintain and did poor damage, to using hyperdrives that were slower than even the cheapest produced in the New Republic, but this was reduced in significance by the sheer numbers that the Sith could field in battle.

This stalemate remained for almost fifty years before the Sith discovered that the Republic was on the other side of Mandalorian space, they also discovered that the Jedi had almost been totally exterminated by the Emperor and Darth Vader. They had also created a superweapon, The Scythe, a battlecruiser mounted with a mass driver capable of turning entire planets into rubble. While the Scythe and its protecting fleet of battlecruisers would be easy targets if they jumped into the heavily protected systems of Mandalorian space, they would be able to prey upon the planets of the Republic with impunity. The Republics worlds relied upon defence fields instead of massive fleets of ships, defence satellites and fighters, so as long as the shields were down the Scythe would be able to destroy Republic worlds. So Sith saboteurs were dispatched against Coruscant their first target, and found allies within the deposed Imperials still surviving in the heart of the New Republic. 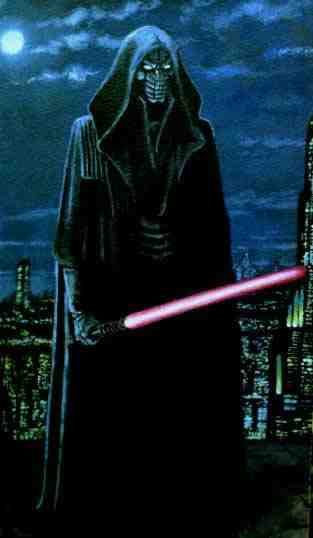 As they prepared to launch their attack on Coruscant they discovered that the Mandalorians had annexed the Princess Teta system from the Republic in an attempt to discover the droid technology that the Krath had used some four thousand years before to kill a large number of Jedi. The Sith feared that the Krath Wardroids could be used against them and would be difficult to detect through the force. So they launched their attack on the Princess Teta system first, before continuing onto the Coruscant system. Teta IV and Coruscant were both destroyed before the republic turned the Sith plan back on them, sabotaging the Scythes shields before launching an attack on it and destroying the Scythe.

The Empire is now one of the two main members of the Greater Sith Empire, the Sith provide massive amounts of slave labour while the Galactic Empire provides the technological know-how. The Sith also are not afraid of force users, where the Emperor hunted down and killed those who showed potential in the force, the Sith train and foster the abilities, although keep in sight that they are only tools to be used.

The two sides are finding themselves well matched, and the Sith have united the factions within the Empire in a way no imperial officer could have, while the Sith and being provided with ships, weapons and the knowledge and tactics to use them by the well-trained and organised Empire.

The short term goals of the Greater Sith Empire, is the final destruction of the Jedi order, they also see the mastery of the Mandalorian technologies as an important target, but ultimately plan the destruction of the Republic and the absorption of all sentient species as subjects of their empire.


Page designed in Notepad, logos done on Personal Paint on the Amiga.
Text completely by FreddyB. Images are by various artists, and the undisputed copyright remains with them.
Any complaints, writs for copyright abuse, etc should be addressed to the Webmaster FreddyB.