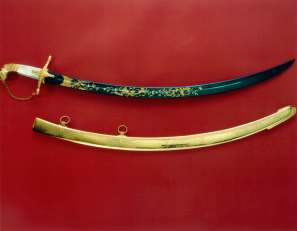 
This sword is made out of an unidentified black metal, which has images etched into it in gold filigree. The images show a number of heroes fighting an equal number of the daemons of the chaos gods, on one side the daemons are bleeding and defeated with the heroes standing in heroic triumph. On the other the daemons are standing over the heroes who are obviously near to defeat, however the heroes faces are joyful as if they are enjoying their defeat. The etchings hold any blood on the blade until it is wiped clean, this shows up minor details in the artwork on the blade that cannot normally be seen.

The Sword has the Poison effect, as described in the main rulebook.

The Sword drains toughness from opponents, 1 point per hit.

The blade has a Rune etched into its blade which only activates when the sword is used against daemons. 50% of the time acts as a Lesser Death Rune vs Daemonkind, the other 50% of the time it incapacitates the user with raptures of joy for D/20 minutes.

The Sword creates a zone of Daemonic Stability around it, meaning that any Daemons within 10 meters of the sword do not have to make instability tests. This will cancel out any zones of instability, and also be cancelled out itself for the duration of the instability effect.