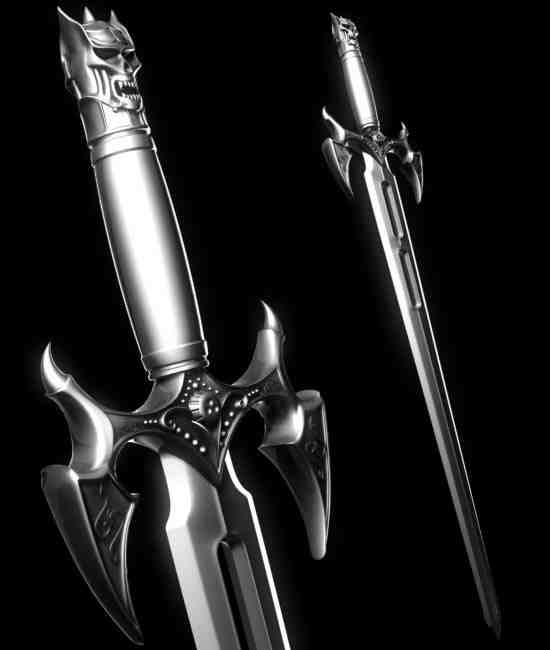 
The Daemon Bane is not a particularly anti-demon weapon, but was actually named after a great warrior who had it commissioned. The sword was created by quenching the steel in the blood of a Greater Daemon, and although that created a powerful weapon, it also twisted the purpose of the weapon. The Sword is made from a single piece of steel, which never rusts or chips, the hilt has no covering but the magical enchantments on the blade means that the sword never slips from the users hands. The end of the hilt is in the form of a chaotical twisted skull, and the guard is dagger-like in the direction of the blade, and fang-like in the direction of the hilt. Users instinctively feel the power of this blade, and cherish it from the moment they recieve it, this can be a problem if the blade is lent to someone else, since both users will want to keep the sword.

The sword does +4 damage against opponents.

The Daemon Bane cannot be removed from the users hands unless he wills it, this means it cannot be parried out of his grasp or even stolen from his unconscious or sleeping body. However it does make the recovery of the blade somewhat icky for a new owner, as they will have to cut it out of its deceased owners grasp.

The Daemon Bane is magically protected against bending, breaking, rusting, or anything else that marks or deforms it.

The Daemon Bane heals its user by stealing life energy from those it hits, the user can heal a number of wounds recieved by them, up to half of the damage they have done to opponents with this sword. However when healing it can also steal powers and abilities of its opponents.

When healing its user as described above, the Daemon Bane stands a 20% chance of stealing a natural ability of the target hit. Against evil, neutral, good and lawful opponents, this would always be a normal ability as chosen by the GamesMaster, eg a Dwarfs darkvision or a Snotlings immunity to the effects of moulds. However when used against Chaotic Opponents, it may absorb a useful ability such as a Trolls regeneration, but stands a 50% chance of either absorbing a mutation or physical feature of the Chaotic being, or instantly mutating the user in a random way.

The Daemon Bane causes its users to cherish it, to stop wanting to use it and no other weapon (even wanting to kill other beings who want to stop you using it) the user must make a Willpower test. However this willpower test is modified by the total number of wound points the sword has healed. However when this modifier negates their willpower completely, they may make a willpower test to realise the effect the sword is having on them, they must still continue to use the sword until either it or they are destroyed, however they may now begin to plot the swords destruction.

The Daemon Bane Sword has created many monstrosities in its time, but the most powerful is the man it was made for, the Daemon Bane himself, who will live as long as the sword exists, and still wanders the Chaos Wastes, existing as the Chaos Champion of Malal. To destroy the sword, a user must find Daemon Bane, and return the sword to him, only then may he be killed and the sword destroyed as his blood burns it to dust. Although Daemon Bane will want the release from his tormented existance, once the sword is returned to him he will fight like the demon he has become to retain it and his life.