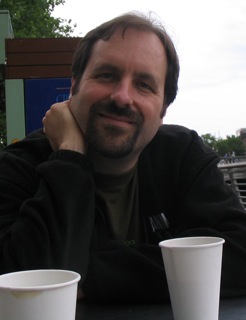 As I've mentioned on the site before, when I was coming up with the tone for RPGGamer I based it heavily on Jonny Nexus' Critical Miss Website. So I count Jonny as the spiritual godfather of this site.
On Monday 16th November, Jonny began a project to publish the entire text of his ENnie award nominated roleplaying novel Game Night on leading RPG website EN World in 26 free weekly instalments.
To publicise this project he's embarked on a blog tour, and I offered to be one of his stops.
So what we've done is a Q+A, over the weekend I bombarded Jonny with a mixture of insightful, probing and idiotic questions, and he showed what a damn fine example of humanity he was by getting back to me with the answers.


FreddyB So, to establish your gamer cred. How long have you been gaming, how did you get into it, and what was your first game?

Jonny Nexus When I was about 12 or 13, so 1981 or 82, some of my friends invited me to play D&D. My friend Steve had been taught it by his older brother, so he was the GM. This was the old red box basic D&D. I bought a copy myself pretty soon, and from there we moved on to AD&D and the old first edition boxed set of Traveller. (Which was my favourite game - I used to buy all the supplements from the Games Workshop in Hammersmith).


FreddyB Most gamers buy far more games than they ever get to play, so what's your favourite game that you've never played?

Jonny Nexus At the moment, it's probably 3:16 Carnage Among the Stars, by my really good mate Gregor Hutton. It's looks actually gorgeous, everyone I know who's played it raves about it, and it's got an awful lot of good responses online - but I've never managed to get round to having a game.

I have got a really nice autographed copy though. :)


FreddyB On your blog you've mentioned since you moved away from your gaming group, you've been joining them through video conferencing with a Laptop sitting at your place at the table. How's that been working out?

Jonny Nexus Pretty good. It isn't the same as being there. All of us, me and them, have to concentrate a bit more on what I'm saying and when I'm saying it. If we try to talk at the same time, it just doesn't work. With one person, it's not the same but good enough. I wouldn't like to try it if you had two people skyping in.

But it's a hell of a lot better than not being there at all. Because I commute from London I don't generally walk in through the door until 7:15, and I'm often delayed. So not having to then set off somewhere else is perfect.


FreddyB You seem to have gotten into writing through doing your web-site first, how did Critical Miss first come about?

Jonny Nexus That was pretty much how I got into it - or at least that's the first place where I got to write stuff that other people read.

It all started because someone I knew got onto the web and offered me some webspace. I wasn't going to take up the offer, but my friend Bubba (that's not his real name, obviously, but when we decided to do it we each came up with a pseudonym) talked me into doing it. He said we should do something about roleplaying, with him doing the web side (he was very into the web back then) and me creating the content.

So at the next roleplaying session (Bog Boy was there, and I think TAFKAC also), we suggested it to the guys. Bog Boy wasn't very convinced, and made the pretty reasonable point that we were completely shit at roleplaying, so how did it make sense for us to talk to the rest of the world about roleplaying? I said maybe that was the point - we could talk about roleplaying as it generally ends up being, not as it's supposed to be.

And we had a sort of brainstorming session, and the name Critical Miss came up.


FreddyB You've mentioned in the past that you wrote Game Night mainly on the train, and that you were probably the only passenger who was happy for delays as it meant you got more done. Since Game Night you've moved, and have a longer journey now, are you getting lots more done, or is the earlier start to the day leaving you too tired to get much done?

Jonny Nexus I'm probably getting about the same amount done, but it's a bit less pressurised. The thing about Game Night was that I wrote it at pretty much a sprint; I'm doing the current novel more like a marathon.

So where I used to write both before and after work (it was about 40 minutes each way) I now write for an hour or so on the way to work, and then just read a paper or a book on the way home. It works better that way; in the evening I'm tired and I find writing harder.

But it still working well. I'm about half way through my next novel (it's a time travel story) and so far, I think that's 100% written on the train. So First Capital Connect will no doubt be getting a mention on the acknowledgements page.


FreddyB About Game Night itself. Most "Gamers" who start writing, usually write about their game worlds, or come out with standard fantasy stuff, why did you decide to actually write about a game itself (even if it is a game being played in a fantasy world)?

Jonny Nexus Well I suppose this is probably the point to make a possibly shameful confession: I'm not actually that much into fantasy. (I've always been much more of an SF man). When it comes to roleplaying, while D&D was my first game, when GMing, I've generally stuck to either SF or superhero things (both my two most successful campaigns were superhero ones).

To a certain extent, I wanted to write about a game because I was very consciously wanting to write a novel that was the novel-version of Critical Miss. Exactly the same sort of humour, just as a novel. By writing about gaming, I was sticking in the comfort zone I'd been writing in for the previous ten years. I wasn't wanting to stretch myself; I wanted something I knew I could nail.

The other thing is that I write comedy, and whenever I've roleplayed the comedy has come not from the setting, but from the roleplaying - or more specifically, the screwing up of the roleplaying. We generally spent a good chunk of our time in hysterics even though the settings and stories we were playing were supposed to be totally serious. So if I wanted comedy, the obvious thing to write about was a game.


FreddyB Although the gamers playing an RPG being seen as gods by the characters inside the game is an old one, how did the idea of it actually being gods playing the game in Game Night come about?

Jonny Nexus Well I've actually ripped myself off, because it comes from an idea I had in an old Critical Miss article. The article starts here:

...but it's only on page 5 that you really see the genesis:

It wasn't originally gods. My original idea was to simply write the story of a roleplaying game from the point of view of both the players and the characters. But the problem with that is that the narrative dealing with the players is describing something that isn't actually happening. It's not real.

Whereas if you have gods playing games with the mortal realm below, then both narratives are equally real. The mortal men are real, and what is happening to them is real. Illogical real, dysfunctional real, mad real - but real. The way I always describe it is that when gods dream, they create reality. So you have that narrative truth that would be missing if you were simply writing up a roleplaying game.

Those were the stages I went through but it all happened very quickly. I think that at about 1pm one afternoon at work I thought, "You know? I should forget about trying to write that UFO conspiriana novel and just write Critical Miss: The Novel" and by about 4pm I'd remembered that old Critical Miss article and pretty much had the basic theme of the novel.

It was probably the easiest idea I've ever had. They don't normally come like that.


FreddyB So what have you got planned for the future, more about these characters, or something totally different?

Jonny Nexus Well I did Saving Stone, which was a free novella-length prequel featuring the same characters in an earlier adventure:

But that's it for those characters for now. Like I think I said up above, my current novel that I'm working on is an SF humour one about time travel. But it's still at an early stage, so I can't say much more than that.


FreddyB In the movie of your life, who would you get to play you (personally I'd get Samuel L Jackson, he looks/sounds/acts nothing like me, but people would get the impression that I was heck of a lot cooler than I really am)?

Jonny Nexus Well I've been told that I look like one of the two brothers in the Fabulous Baker Boys (the ugly one, who *didn't* get to sleep with Michelle Pfeiffer. But if I was looking to "punch a little above my weight" so to speak, maybe someone like Martin Freeman?


FreddyB Since I'm rushing through writing these questions so I can go cook dinner and watch Doctor Who, I've got to ask, which of the Doctors is your favourite?

Jonny Nexus When I heard that Christopher Eccleston was standing down I was gutted. He was my favourite doctor of all time, and I couldn't imagine anyone else in the role. When David Tennant came along, I thought he was awful... and then a few weeks in it just clicked, and now to me, he *is* the doctor. So he's my favourite.

Given my age, I think people might expect me to pick one of the earlier doctors, but Tom Baker was just a bit too early for me (I did watch the show then, but wasn't quite old enough to appreciate it, and then none of the later doctors really stood out).

Jonny Nexus No, only to say thanks for letting me stop on your site. Thanks!

FreddyB It's been an absolute pleasure.

Any complaints, writs for copyright abuse, etc should be addressed to the Webmaster FreddyB.