Star Wars D6 back in print! 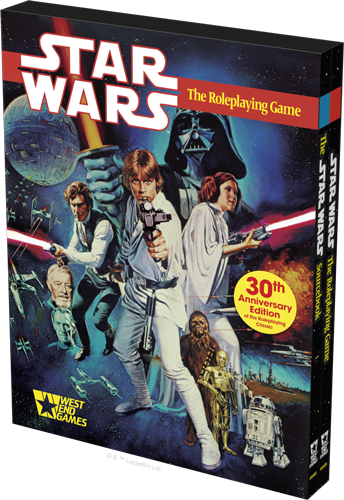 Wow, Wow, Wow. They're bringing it back.

Star Wars D/6 is going to be back in print

Fantasy Flight Games are going to print copies of the Original West End Games version of the Star Wars RPG, to celebrate the 30th Anniversary of the RPG. And will be in the rather gorgeous box set pictured here, although I'm not sure if the rulebooks will have the hard wearing, but slightly odd cloth weave effect that the originals did.
The original rulebooks are beautiful works of art, with in-universe adverts and more information on the background than had ever been available before. I've still got my copies (I can see them in my display cabinet from where I'm sitting).
Now, this is a anniversary printing only, it's not that D6 is going to be back on the shelves with any kind of support. But it's nice to see it getting some recognition. Back when West End Games brought out Star Wars D6, the Star Wars franchise was pretty dead. Toys were off the shelves, the expanded universe wasn't out yet, and to tell the truth Star Wars was just another aging movie series, think Planet of the Apes or the like. So the RPG was it for Star Wars for a while, the only way of seeing new content for that universe, and pretty spectacular content it was too.
So influential on the Star Wars universe was the D6 RPG, that when the Expanded Universe novels were first being written, the authors were given the RPG sourcebooks to work from. And the content from the Novels, fed back into new sourcebooks for the RPG, coming out almost simultaneously, the way the Visual Guide books come out at the same time as the new movies.
So, it's nice to see the old game getting some love, and grab a copy if you don't have one, but don't expect this to be any kind of long term love. The game will be gone from the shelves as soon as the copies sell, and there won't be any official support.
If you want to know more head on over to Fantasy Flight Games.


Any complaints, writs for copyright abuse, etc should be addressed to the Webmaster FreddyB.