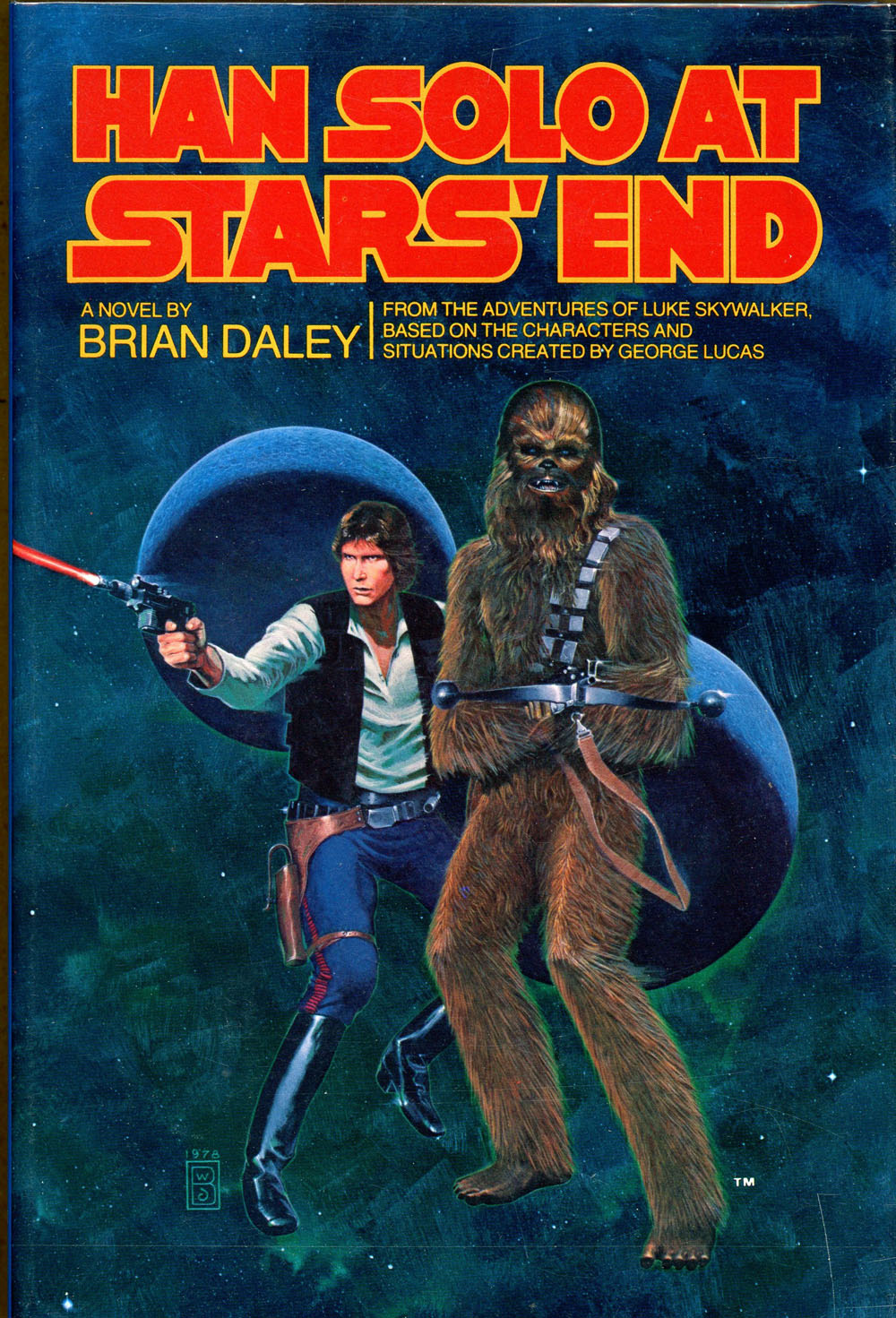 What is it ? : Another book from my childhood, this time from 1979, so still before The Empire Strikes back was released, but while it was in production. Han Solo at Stars End is the first part of a Trilogy based around Han Solo's time almost directly before A New Hope.
Han and Chewie in trouble as usual head into the area of space called the Corporate Sector Authority, but the Millenium Falcon needs authorisation waivers to operate in that space due to the military specification of her engines and the above the norm levels of weapons she carries. Stealing the ship back out of impound, they head to some outlaw technicians who have modified the ship before, and will be able to alter her id and forge the documentation needed.
However, the leader of the Outlaw techs, Doc has been captured by the Authority and thrown in prison, his daughter Jessa, offers a trade, the modifications they need, in exchange for breaking Doc out of prison.
Alarms suddenly blare, and the base comes under attack by Corporate Sector Authority IRD's, light starfighters used locally. The outlaws have a group of old Z-95 Headhunters, which Han takes one, and with some outlaws they fight off the attack, using the Headhunters agility in the atmosphere against the built for space, IRD's.
Jessa introduces them to two droids, one Blue Max is an immobile slicer droid, designed for penetrating computer systems. The other Zollux (more on that later), is a cargo lifter who has been modified to carry Blue Max undetected within his torso.
Afterwards, the Falcon gets disguised as a drone barge, with the ship itself acting as the control module for the massive cargo vessel, and they head to Orron III to meet with a contact of Jessa's who will have more information from the Authority command centre there. Arriving undetected they meet with a group of others whose families have disappeared into Authority prisons, and they are ambushed by authority ESPO's (Security Police Officers). Chewbacca is captured, and Blue Max seizes control of massive harvesters to cause a distraction while everyone else boards the Falcon (still in disguise) and flee the planet.
Their ship is almost completely unmaneuverable, due to it having been loaded with grain while they were landed, and they are caught in the tractor beam of a Authority capital ship. Han drops the grain, creating a cloud blocking their pursuers sensors, then drops the disguise, causing the blinded capital ship to crash into the abandoned hulk of the cargo ship, disabling it.
From the information they have gathered, they find that Chewbacca, Doc and the loved ones of the group now aboard the Falcon, have all been taken to the supermaximum Authority prison called Stars End. But Jessa's contact is murdered aboard the Falcon, and they realise that they were given away on Orron III and there is a traitor in their midst, finding out who it is, Han jettisons him into Hyperspace, and they begin monitoring transmission to find a way of sneaking into the prison.
They monitor a transmission mentioning that the entertainers that are expected for the Prison wardens wife will be late, they decide to pretend to be the entertainers, and knock up outfits. However, on their arrival, the entertainers the warden was waiting for was gladiator droids, so they are forced to put Zollux into an arena against an Executioner Droid which massively outclasses him. And they discover that the prisoners are all into cryogenic storage, to avoid breakout attempts.
Blue Max is used to sabotage the prison, as they plan to blow the reactors, and use the power outage to break everyone out cryo storage. However, he overloads the reactors by too much, and the battlecruiser armour that the tower of Star End prison is made from means that the blast launches the tower into orbit of the low gravity moon. And Han has to fight the prison wardens body guard, while the others get everyone back to the Falcon.
However, there are many more prisoners than the Falcon can carry, so they are forced to extend the airlock tubes normally used for docking to other ships, and fill those too.
With everyone aboard, and with the prison rapidly spiraling back to it's doom on the planets surface, they escape.
Doc is reunited with Jessa, who not only rebuilds the destroyed Zollux, who along with Blue Max, decides to stay with Han to see more of the galaxy, but agrees to more modifications to the Millenium Falcon as Han enters full flirtation mode.

High Points : And again, the 8 year old me, desperate for more Star Wars read this book, and was amazed. It was Han Solo being cool, and although it didn't have any of the other characters in it except Han and Chewie, and not even the Empire made an appearance, this was the background of Han Solo to me. Here was the guy that shot Greedo first, ejecting a traitor out of an airlock, the best pilot in the galaxy flying an out of date starfighter against cutting edge military vessels, and coming out ahead because he knew their advantage.

And on the subject of those out of date fighters, this was the first appearance of the Z-95 Headhunter, which isn't mentioned as an early version of a X-Wing, or a Clone Wars era vessel. The description is of a vessel so dated it seems to share more in common with an aircraft than a starfighter, with an acceleration couch and a large bubble canopy, long before it was made canon by appearances in the Clone Wars series, and many video games.

The introduction of Zollux and Blue Max, these were two droids I adored, Blue Max is cheeky and bright, everything R2-D2 is, but he can speak. However, he totally relies on Zollux for movement, as he isn't much more than a computer module. And Zollux is an old cargo lifter droid, with experience of the galaxy, but the joy of having been made useful again by the addition of Blue Max to his torso.
When I was a kid, I used by Death Star Droid figure as Zollux, and a broken R2-D2 whose legs had broken off as Blue Max,
And a final point on Zollux, in the rest of the world, and in the later reprints, Zollux was actually called Bollux, a BLX loading droid. However, I live in the UK, and Bollux sounds far too close to Bollocks, a colloquial term for testicles, so he was renamed here, and will always remain Zollux to me (it starts with a Z, so sounds more Sci-Fi anyway ;) ).


Low Points : Owning the book for nearly 40 years makes it difficult for me to be remain objective in any review of this book, the nearest to a criticism I can find is that it is written for younger readers, so isn't the heaviest read, and the world view of the book is fairly simplistic. However, I still enjoy it as a jolly good space romp, with Han Solo and Chewbacca, winging it across the galaxy, through skill and guts rather than good planning, which to me makes it true to the character and the movies.

So what do you really think ? : As should be quite obvious by now, I adore this book, not as much as Splinter of the Minds Eye, but still massively. It's far lighter in tone than the other Star Wars books I've read, the fate of the galaxy doesn't revolve around the characters actions. However that doesn't stop them being funny, being heroic and being a whole load of fun.

Final Words : When I originally got the books, I didn't realise they were a Trilogy, and I actually got Han Solo's Revenge first and read it, going back later to read the others. It didn't make much difference to Han Solo's Revenge, except where Zollux and Blue Max came from, and apart from very loose connections in that way, the books are only a trilogy, as they're Han Solo's adventures in the Corporate Sector (as the West End Games Sourcebook was named).