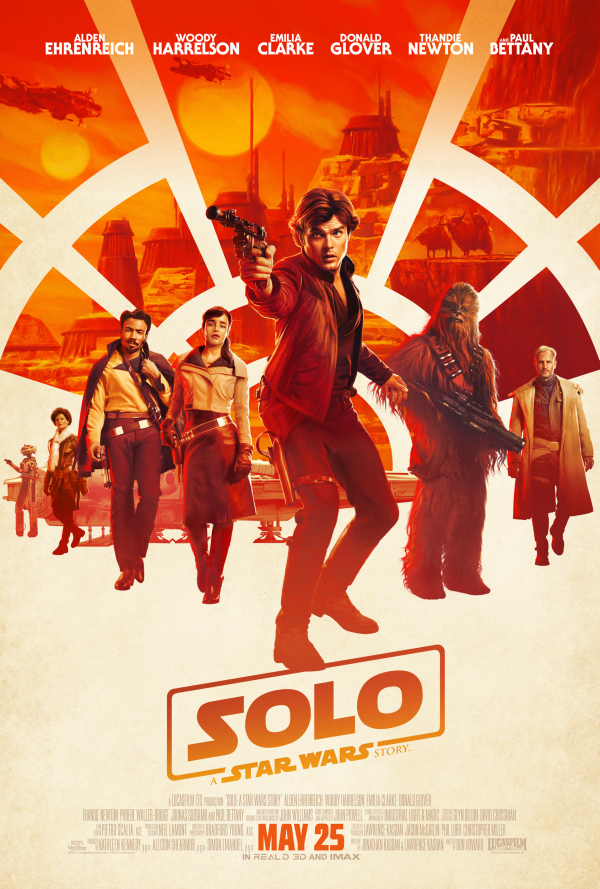 What is it ? : SPOILERS
.
.
.
.
.
.
.
.
.
.
.
.
.
.
.
.
.
.
.
.
.
.
.
.
So Han is on Corellia, and steals a speeder heading back to the crime lord he's working for, he's failed to deliver on a deal and she wants him dead. He speaks with an old friend, Qira, and they escape in his stolen speeder. A chase ensues, and he gets to the spaceport, where they intend to bribe their way offworld. The bribe works, but Qira gets caught a the security gate, and Han gets away pledging to rescue her. With no money left to buy a flight off world, he joins the Imperial Military.
Three years later he's involved in a battle on Mimban, and meets up with some criminals who are going to steal a ship for a heist they're involved in. Threatening to inform on them if they don't let him join them, they get him arrested as a deserter, and he gets thrown in a jail with the beast, which turns out to be Chewbacca, who has been killing anyone dumped in the cell with him. But Han speaks some Shyriiwook, and convinces Chewbacca that they can both escape by working together. Catching up with the criminals, Beckett, Val and Rio, who rescue the duo mainly to recruit the Wookiee.
The gang is going to steal some Hyperfuel which is worth a fortune, Beckett reveals they are working for the Crimson Dawn Syndicate, and he wants to retire on his share of the profits, Han wants to buy a ship, Val wants to settle down with Beckett, and Chewbacca wants to free Wookiee slaves.
They board the train the fuel is aboard, and cut it free to be winched aboard the ship they stole, but they are ambushed by a rival gang who wants to steal the fuel, and it is destroyed. Val and Rio are killed in the fighting, and Beckett explains that the Syndicate will want them dead for failing. At the head of the Syndicates ship, Han meets with Qira, who is now the second in command of the Syndicate, below Dryden Vos, and Han fast talks his way out of the death sentence, by telling Vos that they'll get more Hyperfuel, from the mines below Kessel.
Vos sends Qira along with them, and they recruit Lando Calrissian by playing him at sabacc, to use his ship, the Millennium Falcon to get the raw fuel to a refinery before it becomes unstable and explodes.
They head to Kessel, and Qira cons their way into the command centre by pretending to make a deal, freeing the droids and slaves from captivity and starting a revolution. Getting the fuel aboard the falcon, they blast off, but are intercepted by a Star Destroyer, so have to make a run through the clouds and rubble fields around the planet, emerging at the Maw, a giant black hole. They are ambushed by a giant space beast, that they lure into the black hole, and by using a sample of the raw fuel, they escape the gravity well of the black hole and make the kessel run in 12 parsecs (rounding down), rather than the usual 20.
They make it to the refinery, but are ambushed by the rival gang, as Lando leaves in the Falcon, but Han discovers they are people fighting the Crimson Dawn Syndicate which has ruined their planets. Han teams up with the gang, but Beckett leaves.
They meet with Vos, but he is aware of their plan, because Beckett has betrayed them, telling Han he always told him not to trust anyone, and Han reveals this was part of his plan, because he listened to him telling him that people always act to type.
Beckett steals the fuel, and leaves with Chewbacca carrying it, Han battles Vos, but Qira strikes the killing blow, telling Han to rescue Chewbacca.
Qira then contacts Vos's boss, Darth Maul, and is ordered to go to Dathomir as she is being promoted to head of the Crimson Dawn.
Han catches Beckett, but ends up gunning him down, shooting first before Beckett can trick him, and sees Qira leaving aboard Vos's ship.
Han catches up with Lando, and notices that he cheated in the sabacc game earlier, and uses that to beat Lando at sabacc, winning the Falcon, and hanging his lucky dice, Han and Chewbacca jump to hyperspace to go to Tatooine to meet a criminal lord that Beckett mentioned was needing a pilot.

High Points : I love the explanation for Han's name, when he is signing up with the Imperial Military, they ask him his name, which he gives as Han, and then which clan he is from, and he tells them he's not with any, he is alone. So the officer fills out his paperwork, as Han Solo. I really liked that, a spin on his name I've not been aware of before.

The dialogue is sparky and sharp throughout, with many jokes and humour throughout.

The Falcon has never looked better, and the fact that not only does the new look get explained, but it also fits continuity with both A New Hope, and the YT-1300's seen in the prequels.

In the standoff between Han and Beckett at the end of the movie, Han Shoots First, definitively giving us the character we liked who gunned down Greedo.

The continuity is amazing, we get all sorts of tie ins with the Legends universe, from the sabacc games to win the falcon, Lando dictating the Lando Calrissian novels, and loads more.

I also have to complement the two main performances of recast characters. Alden Ehrenreich does a likeable version of Han Solo, and Donald Glover is uncannily like Billy Dee Williams at times, and is extremely charming and interesting whenever he's on the screen.

Low Points : HYPERFUEL, why is the word HYPERFUEL capitalised in the starting text? I take it that it's Hypermatter as exists in the Legends universe, and why is it mined on Kessel? I thought Kessel was famous for the Spice Mines? And why does this fuel only exist in one mine in the Galaxy, but is used by all ships, seems that would be a very important place, and one not just run by the Pyke Criminal Syndicate?

Han ends up in the Imperial infantry fighting on Mimban, which was first mentioned in the Splinter of the Minds Eye novel. While it's muddy, and the world is mentioned as having valuable mines worth fighting over, it bears no resemblance to the existing Mimban.

L3-37, the characterisation and dialogue throughout the movie is great, but L3-37, Lando's droid who constantly gripes about Droid rights is a little annoying. But I do like the fact that she gets incorporated into the Falcons computer systems, which explains C-3PO's comments about them in Empire Strikes Back.

Han's Lucky Dice are shown several times throughout the movie, first on the speeder he has stolen, but he gives them to Qira before she is captured. We never see her return them when they meet again, but at the very end Han suddenly has them back and hangs them in the Falcon!

Darth Maul turns up in hologram format, portrayed once again by Ray Park (but voiced by Sam Witwer from the Clone Wars and Rebels series, rather than Peter Serafinowicz who voiced him in The Phantom Menace. Now, since I've watched both Animated Series, his appearance makes some sense to me, although I'm a little messed on the timeline, since last time we saw him in Clone Wars, Palpatine took him prisoner to make later use of, and then he shows up in Rebels as a outcast on Malachor, and now we've got him running a Criminal Syndicate between those two times.
But despite that, I'm guessing anyone who hasn't watched the Clone Wars is going to be a little confused as to him turning up unexplained in Solo.

I'm not a fan of the ending of this movie, we get left with threads hanging, what's going on with Qira, whats Maul up to, and why is Han heading off to meet Jabba which seems to match with a New Hope, but is several years out?
It seems as if they're setting up for a sequel, even though the Star Wars stories are supposed to be stand alone stories apart from the Episodes. And given Solo's performance at the box office so far, I doubt we're going to see a sequel to it (although times change, so who really knows).

So what do you really think ? : I liked this movie, it's getting a lot of hate at the moment, but I found it quite watchable, very likeable, and entertaining throughout.
Having only watched it once, and only a couple of hours ago, it's still really early for me to make sense of everything, but overall I'm more impressed than I thought I might be.

Final Words : My opinion might change as I think about this, but at the moment, while not near the top of my favourite Star Wars movies, it's a good film, and worthy of the name Star Wars.