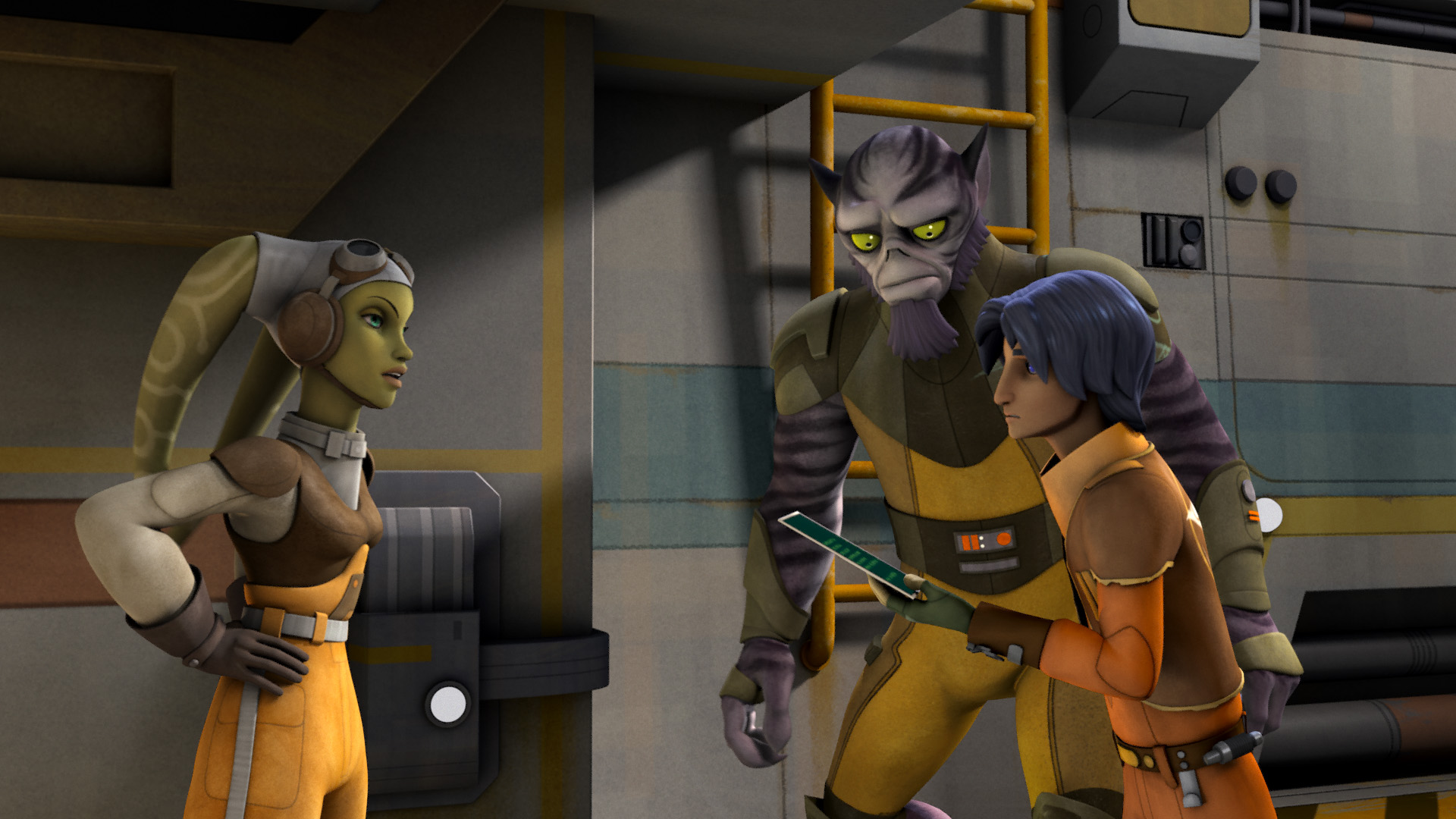 What is it ? : Ezra's arrival on the Ghost is still causing disruption, Chopper is causing chaos by interfering with his training and by sabotaging the ship to inconvenience him. When his bunk collapses onto Zeb because Chopper has removed the bolts, he and Zeb begin fighting, and to get them out of the ship Hera sends them on a supply run, to get various items including meiloorun fruit, which is almost impossible to get on Lothal.
Heading into town, Ezra meets friends of his parents, and then realises that meiloorun fruit will be impossible to get, however he spots a case full being collected by the Empire, so he and Zeb set off to steal them.
Ezra is spotted stealing from the top of an Imperial transporter, and Zeb and he flee through the streets of the city, with Zeb ending up stealing a Tie Fighter and rescuing Ezra.
As they attempt to navigate their way home, they spot a burning farm, which belonged to the friends of Ezra's parents we met earlier, and they detect Imperial transports heading away from the settlement with prisoners. Dropping Ezra off on top of the transports, Zeb attacks the convoy in the Tie, while Ezra frees the prisoners and steals a meiloorun fruit from the case atop one transport.
The Rebels free the prisoners, and escape, returning to the Ghost with a single meiloorun fruit for Hera, claiming to have crashed the stolen Tie Fighter, and discovering that Sabine has graffitied their shared room with art showing the collapsing bunk earlier revealing that Chopper had taken the bunks, so the fighting from the beginning resumes, but with Ezra and Zeb allied against Chopper.

High Points : The episode builds the relationship between Zeb and Ezra, with Ezra having been using his saving of Zeb's life in the previous episode against him at every opportunity, but the two coming to an agreement that they are now eternally quits. Without having any major villain or devious plot to defeat, it shows how the nature of the characters automatically leads them to come into conflict with the Empire all the time, and the effects Imperial rule is having on the population of Lothal.

It is also unclear whether Chopper deliberately sets up the conflict between Zeb and Ezra to force them to work together against him, strengthening the team and removing the abrasiveness between the two.

Low Points : I'm really only nitpicking any faults in the episode, it is perhaps a little inconsequential when we really want to see the epic conflicts of Star Wars, what we're getting is two characters shopping for fruit in a hostile universe.
And I'm not convinced by Zeb being able to pull open a Tie Fighters hatch from the outside when it's in flight, he seems to have some kind of natural climbing ability, sticking to sheer walls, but prying open a starfighter?

So what do you really think ? : Again I enjoyed the episode, but that said, it's enjoyable to watch due to the dialogue and action, but it's not really compelling action, so this definitely wouldn't go down on a list of favourite episodes.

Final Words : We've built the team, I hope the next episode get's into the Galactic Civil War a bit, as I could become bored with the day to day details of life on the Ghost. That said, these episodes really have built the interactions within the team well, and I feel we know the characters brilliantly for moving forward with the action.