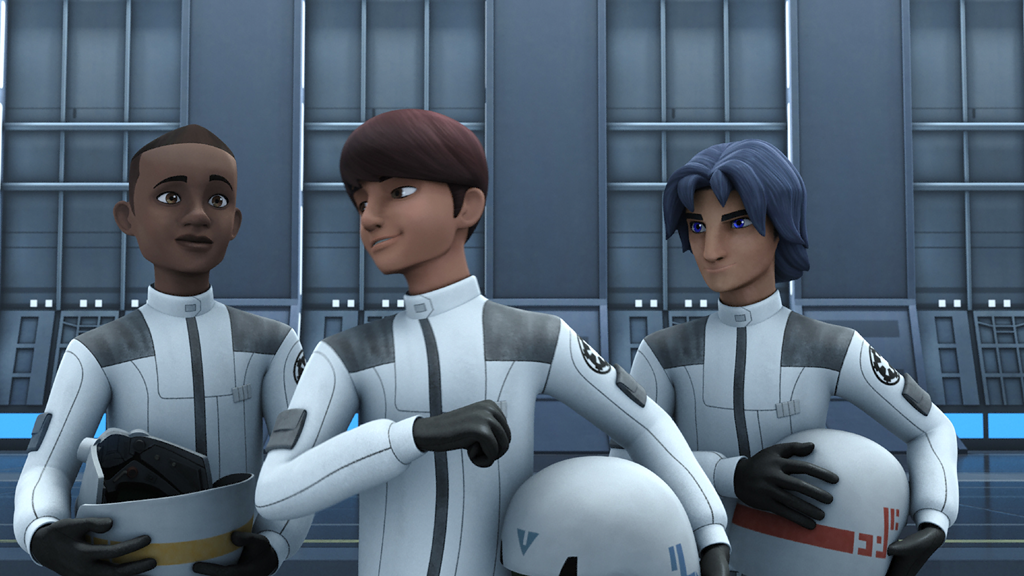 What is it ? : Ezra has infiltrated an Imperial training academy, posing as a student and scoring top of his class in all the tests. As the top of the class he is given more freedom and access to the Imperial base, which he is using to gain access to Agent Kallus's office so he can steal a decoder so the Rebels can locate the shipment of a Kyber Crystal.
Ezra recruits two other students in his class to help him, but the theft takes longer than the Rebels anticipated, meaning Kanan and Hera have to leave the others to break Ezra out of the Academy while they jump to Hyperspace to intercept the Imperial Transport.
Ezra and the others win that days activity to ride in a Walker, taking control of it and fighting their way towards the exit, however, Loenis, one of the students, remains behind to try to locate his sister.
Meanwhile, Kanan and Hera attack the Imperial Transport ship, with Kanan using the Phantom to distract it's escort of Tie Fighters, while Hera destroys the transport. As it explodes, the Kyber Crystal magnifies the explosion, and Kanan has to dock the Phantom so Hera can jump to hyperspace before the explosion destroys them.
Loenis is later interrogated by the Grand Inquisitor, about his escaped comrades.

High Points : A solid episode, which focuses on Ezra and his efforts to acquire the decoder, but also shows the dis-satisfaction that even cadets within the Imperial Academy have. The episode also shows how the Empire is training it's people to betray each other to attain status within the Empire. It also shows how those that display unusual talent are reported to the Inquisitors, as of interest as potentially force sensitives.

I was also very disappointed by the attack on the Imperial Transport, there were too many scenes of Hera looking intense as she concentrates on targeting the Gozanti class cruiser, without any real feeling of tension.

So what do you really think ? : While a decent and watchable episode, which does introduce some characters which will prove to be important later, and continuing the Grand Inquisitors journey as the major threat of the first season. The episode doesn't have anything to make it stand out from the crowd, there's no absolutely amazing scenes which I can truly recommend.
That said, the scene where Ezra is stealing the decoder from Kallus's office is interesting, and the scene with the escape with the walker is action packed and memorable, but I don't feel these are enough make the episode unmissable.

Final Words : Another quality episode, even if the series is still finding it's feet, they make few mistakes and it's enjoyable enough. I can totally understand them having episodes focusing on one character to flesh them out, but the high point of the series is the interaction of the characters, and there's not enough of it in this episode.