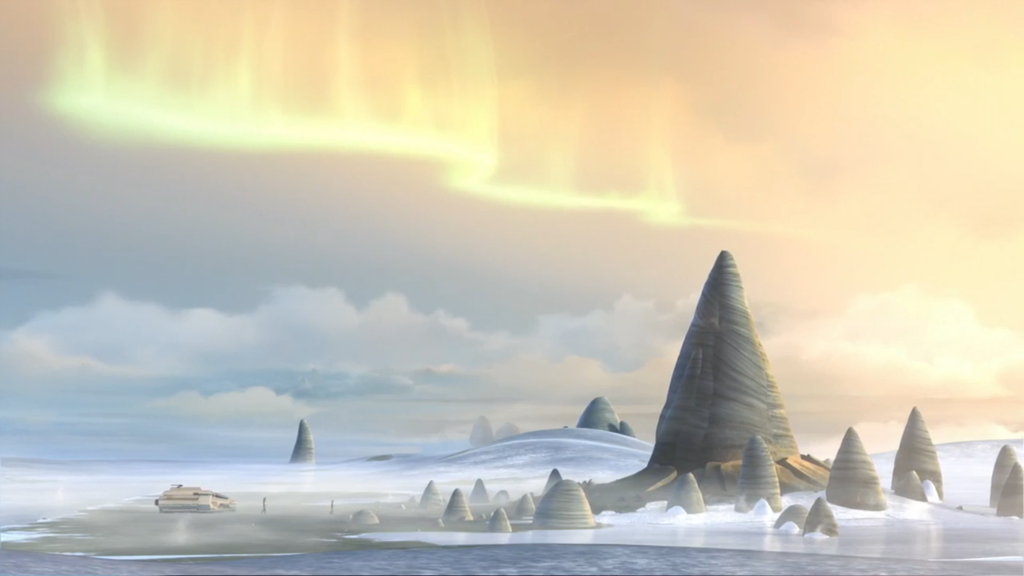 What is it ? : Kanan takes Ezra in the Phantom to give him the next stage in Jedi training, handing over the controls and asking Ezra to lead them to where he is supposed to be. Reaching out with the force, Ezra feels a Jedi Temple on Lothal, which Kanan was aware of but wasn't sure if that was where Ezra should be.
He meditates while Ezra attempts to open the Temple, urging the boy to reach out with his senses, and Ezra realises the temple won't open for just him, it needs two of them to work together, which works and they enter the Temple.
Inside Kanan tells Ezra that he must now take the test alone, starting to meditate in the entrance chamber, next to the desiccated corpses of other Jedi Masters who died and are still waiting for their Padawans to return from the test.
Ezra reaches a split in the tunnel, and does Eenie Meanie to decide which route to take, and a vision of Kanan scolds him for his method, and they soon encounter the Inquisitor and Kanan joins a lightsaber fight against him. In the fight, Ezra is pushed off a ledge and plummets down, into his quarters on the Ghost, and listens into a conversation between the other members of the crew who say how they pity him, how they're using his skills, how he doesn't fit in. As Ezra realises that this is part of the test, and his friends wouldn't actually say this, the Inquisitor returns and kills them, as Ezra flees back into the tunnels of the Jedi Temple. The Inquisitor hunts him, but Ezra realises this isn't real, and stands up to the Inquisitor as he approaches to strike him with his lightsaber, and the blade passes through him.
With the vision of the Inquisitor gone, Ezra hears the voice of Jedi Master Yoda, who questions him as to whether he's becoming a Jedi for revenge for what was done to his family?, because Kanan expects it of him?, but Ezra eventually says so he can protect others.
Meanwhile Kanan is also communing with Yoda, saying that training Ezra is giving him a second chance, Yoda however tells him that it is his final chance, and Kanan hopes that Ezra will not lose himself as Kanan once did.
Ezra returns to the junction, and asks Yoda which branch to take, which Yoda tells him is the wrong question. Ezra doesn't understand, and questions as to why he is even in the temple, which Yoda tells him is a better question. Yoda tells him he has much anger in him, but Ezra reveals that he sees the good acts that the Rebels perform, and the effect they have on others, and wants to be part of that, and how it makes him feel alive. Yoda tells him he has a difficult path ahead of him, but he may still become a Jedi, showing him a starscape, and one of the stars drops into his hand becoming a small blue Kyber crystal.
Returning to Kanan, the two leave the temple which closes again after them, Ezra wonders if they could use it as a base, but Kanan says it is part of the past and will hopefully remain for others in the future.
Back at the Ghost, Ezra uses the crystal to construct a lightsaber, and once finished shows it to Kanan, it is a hybrid blaster/lightsaber, which Kanan remarks is different to those of the Jedi order, but that suits Ezra well.

High Points : This episode links back to the training Jedi received in The Clone Wars series, with strong resemblance to the episodes where Ahsoka escorts some younglings to their trial. And as with that episode, Ezra faces his personal fears, and receives his Kyber crystal as a reward.
Yoda is wonderfully enigmatic, and the episode highlights the dangers that Ezra will face with the Dark Side in the future, as even his final answer to why he wants to become a Jedi, to be powerful enough to defend those around him, is dangerously close to the Dark Side, and his earlier answers, to get revenge on the Empire, and to be what Kanan expects of him, are both weak and would lead him to the Dark Side.
It's clear that Ezra will need to lean on those around him, as it's their light that will keep him balanced and on the right path.

There's little action in this episode, but it provides a solid plot, and lots of foreshadowing of what is to come, and i found it absolutely fascinating from beginning to end.

Low Points : Given Yoda's reluctance to train Luke just a few years later, I'm surprised he provides the Kyber crystal to Ezra given how dark his answers were. There's a glimmer of a higher purpose in what he says, but mostly he speaks of gaining power, getting revenge, etc. While this is fantastic for character development, and the idea of Ezra struggling with the Dark Side, but never falling to it is compelling, it does seem that Yoda's got some double standards going on.

While Ezra could be seen to have been reacting with fear of the Inquisitor, he does seem to take an extraordinarily long time to realise that this is all an illusion, and to overcome it. He even seems to have realised, then forgets again during his test, making him seem a little dumb.

So what do you really think ? : Another brilliant episode which I truly enjoyed. Knowing what is to come, it's amazing to see how much is being foreshadowed this early in the series.

Final Words : I know I'm a massive Rebels fanboy, but I'm actually finding it difficult to review a series where everything is so good. I'll actually be dissapointed if some episodes don't let me down, and by the end of Rebels I've scored everything as 8+.